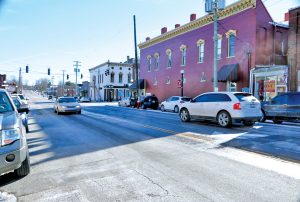 Just a year ago, residents and merchants in downtown Harrodsburg were worried about businesses moving away. Now many are calling out for more parking.

For the first time in years, the vacancy rate in downtown Harrodburg is zero. But with all of the activity there are also problems.

Last summer, everyone seemed to be complaining about businesses leaving Mercer County. But since the fall, Harrodsburg has gained a slew of new businesses, including Harrodsburg Urgent Care, LouElla’s on Main, Commonwealth Credit Union, Tim Short AutoMax and the Skillet on Main, among others.

But with that growth comes several other problems, including finding space for everyone. The building next to Kentucky Fudge has sold, which leaves Charmed Antiques without a home.

While local residents are glad to see buildings occupied, it does worry some that many of the new tenants are legal firms. Drew Hardgrove, a member of the Harrodsburg First Main Street Program said he doesn’t want downtown Harrodsburg to become like downtown Nicholasville, which becomes a veritable ghost town once the legal offices close at 5 p.m.

“It’s not necessarily in the best interest in revitalizing a commercial area,” Hardgrove said at the Harrodsburg First meeting last week.

However, the biggest issue downtown is parking. Residents and store owners have gone before the Harrodsburg City Commission to complain about the lack of parking spots.

“I’m tired of not having parking on my own property,” said Allan Barlow, managing director of the Ragged Edge Community Theatre. In addition to not having enough parking spots for theatergoers, Barlow, who has also joined the Harrodsburg First board of directors, said the theater is looking at possibly expanding their facility, including adding a scenery shop. But any additions could be held up by the lack of space. He said Ragged Edge is considering posting signs.

At the same time, Barlow said the lack of parking is preferable to having no one downtown.

“This is a good problem to have,” Barlow said.

Julie Wagner, executive director of Harrodsburg First, attributed some of the growth to the work her agency does to market Harrodsburg’s downtown area. Especially the Oktoberfest event, which draws thousands of visitors from across the state and from as far away as Germany. Many of them are first time visitors to Harrodsburg, and they often comment on the beauty of the city’s historic downtown area.

“All we’re doing is creating a culture that people want to be a part of it,” Wagner said.

At the same time, Wagner was against one of the solutions which has frequently been put forth: stepping up police enforcement of local parking ordinances.

“There’s no point in ticketing people if we don’t have an alternative,” Wagner said. “That just causes dissent.”

She said Harrodsburg needs more parking spots. And while there are several spaces available to create more parking, so far no announcements have been made.

One final problem with the city’s recent growth spurt is figuring out how to maintain that growth while also maintaining Main Street’s historic designation.

Wagner also said she’s in talks with Mayor Art Freeman about reviving the Board of Architecture Review. Downtown Harrodsburg is not just a commercial district, it’s also a historic one. Many property owners are looking at working on their buildings, but all work performed must be within state and federal guidelines in order for the properties to continue to qualify for federal tax incentives.

In other business, the Harrodsburg First Main Street program:

While Oktoberfest has drawn thousands of visitors downtown during its short history and convinced dubious merchants of its worth, the festival hasn’t made a lot of money for the organization that puts it on.

“We did really well this year,” Wagner told the board. “We pretty much broke even.”

It was agreed Harrodsburg First needs to bring in more sponsorships and donations. However, other than that, they are not planning on changing much from last year’s festival. Wagner said she was planning on even bringing back the Ferris wheel on Main Street. Oktoberfest 2019 runs from Friday, Oct. 11, through Sunday, Oct. 13.

However, several board members were disconcerted to learn that the Fort Harrod Beef Festival, which is being combined with JVM Bikes, Blues and BBQ event, is being moved to the first to the first weekend of October.

That means that four of the biggest events in Mercer County—Pioneer Days, the Old Fort Harrod Jazz Festival, the Beef Festival and Oktoberfest—are all being held in less than two months.

“People are going to be event exhausted,” said Wagner, who also worried about competition for sponsorships. “Everybody needs to be working together.”

Linda McClanahan, the chairwoman for the Beef Festival, said they weren’t trying to compete with other festivals.

McClanahan said the festival was moved because it was so hot in June, which is when the Beef Festival has been held for the past 13 years.

“We’re trying to make things bigger and better,” she said. McClanahan said the Beef Festival would still have the same sponsors, not add new ones.

“I don’t want this to be a competition,” she said.

Harrodsburg First has been asked about adding more events downtown, including a regular concert series like Lexington’s Thursday Night Live.

But the issue is paying for the event and staffing. Harrodsburg First has held concerts downtown in the past, but they didn’t draw big crowds. Wagner said getting a real draw “would cost some money.”

The event would feature performances by the Ragged Edge cast. It would be the first fundrasier to install three murals downtown before Harrodsburg’s 250th birthday in 2024.

The next meeting of the Harrodsburg First Main Street program will be held noon on Thursday, Feb. 21, 2019.