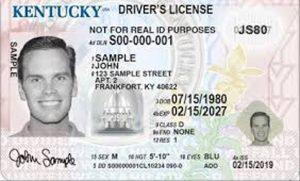 Kentucky will begin a county by county roll out of new federally compliant identification cards in March. The state said they will become available in Mercer County this April.

That’s according to the Kentucky Transportation Cabinet, who have announced a county-by-county rollout of new Kentucky driver’s licenses, permits and IDs that will begin in March and conclude by May.

Citizens may only apply at the Circuit Court Clerk’s office. The identification cards will be mailed to applicants 5 to 10 business days later.

New pricing will be in place to account for the doubled renewal cycle and additional security features, according to a KYTC press release. A new eight-year standard driver’s license will be $43, and a new eight-year Voluntary Travel ID will be $48. Four-year credentials are half the cost.

More complete pricing, including information for motorcyclists and CDL holders, is available at drive.ky.gov/confidentky.

While the date for the release of the new IDs here in Mercer County has been tentatively set for the second week of April, the specific date the new cards will become available will be announced at least two weeks prior to the effective date, the state said.

On Oct. 1, 2020, Kentucky’s standard licenses will no longer be accepted to board U.S. flights or enter military bases. The commonwealth’s new Voluntary Travel ID is federally compliant license and will be accepted at airport security checkpoints and military bases.

Standard driver’s licenses and permits will remain acceptable to drive, vote, access federal and social benefit services (such as VA hospitals, Social Security offices, and federal courthouses) and for general identification purposes (such as signing a lease or purchasing age-restricted goods).

A Voluntary Travel ID credential offers the benefits of a standard credential and is accepted to board U.S. flights and access restricted federal facilities.