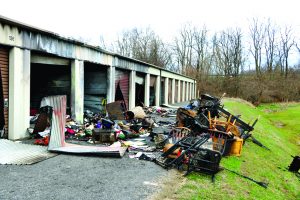 Authorities are still trying to determine what started the fire at T. Peavler Moving and Storage on Saturday night.

Investigators are still trying to determine what started a blaze that damaged a dozen storage units Saturday night.

According to Chief Scott Hammons, the Harrodsburg Fire Department received the call about smoke at T. Peavler Mini Storage on Morris Drive a little after 9 p.m. on Saturday, Jan. 5.

Units from Harrodsburg and the Mercer County Fire Protection District responded to the call. Hammons said they had the fire under control within a half an hour.

There were reports on social media that night about propane tanks exploding.

However, Pat Alford, an arson investigator with the  Kentucky State Police Post 7, believes the explosions were either aerosol cans or pressurized canisters of helium detonating due to the tremendous heat of the blaze.

Even though helium is a noble gas which doesn’t burn, the metal canister it’s contained in can rupture under fire.

“Anything pressurized, it pops,” said Alford. When he arrived on the site a little after midnight, the overheated metal was still popping, he said.

A dramatic example of what can happen when a pressurized helium container ruptures happened Sept. 1, 2016, when a Falcon 9 rocket manufactured by Space X exploded at Cape Canaveral. Investigators subsequently determined a breach in the launcher’s helium pressurization system led to the destruction of the booster and its $200 million satellite payload, according to spaceflightnow.com.

Alford, who was at T. Peavler Monday, said he had not yet found what caused the fire.

“We’re trying to get finished up,” he said. When ready to announce their findings, the KSP will issue a press release, he said.

T. Peavler Moving and Storage has been in business for over 30 years, said Julie Peavler, who declined to discuss the ongoing investigation.