Rise In Use Of E-Cigarettes Among Youth 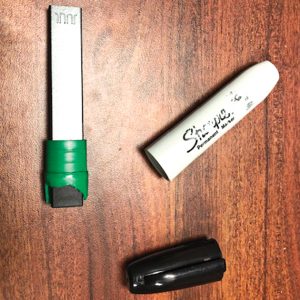 One local student concealed a Juul—which is about the size of a computer zip drive—inside a magic marker.

Anti-smoking advocates are seeing decades of work in reducing the number of Kentucky teen smokers go up in smoke with the rise of e-cigarettes.

The use of e-cigarettes—known as vaping or Juuling, after the most popular brand of e-cigarettes—has become so popular among the young that the Food and Drug Administration has called it an epidemic, prompting a federal crack down on the marketing and sale of e-cigarettes to children.

Federal research shows that the number of U.S. high school students who reported being current e-cigarette users increased 78 percent between 2017 and 2018, to 3.05 million. The same report showed use by middle schoolers increased 48 percent, according to Kentucky Health News.

But perhaps the best demonstration on the growth of vaping here in Mercer County can be found in local teachers’ desk drawers.

Teachers confiscate tobacco products they find on students. In previous years, a drawer would have been full of cigarettes and packages of chewing tobacco. However, Emily Steer, the smoking cessation specialist at the Mercer County Health Department, shows a picture of what one local teacher confiscated this fall.

“It’s all Juuls,” Steer said. “Not a single cigarette.”

What’s worse is that most adults are completely blind to the epidemic.

The most popular product is Juul, which looks like a USB flash drive. Juul and other brands of e-cigarettes can be odorless and hard to detect.

E-cigarettes are extensively marketed as a safe alternative to smoking, but there is no research that confirms their efficacy in stopping smoking or the possible danger from their long term use.

Steer called e-cigarettes a “gateway drug” to other substances, including alcohol, drugs and more traditional forms of tobacco. She said the use of e-cigarettes—which contain three main ingredients: nicotine, a chemical called propylene glycol and some kind of flavoring—damages the part of the brain that regulates impulse control and decision making.

“Nicotine changes the structure of the developing brain,” Steer said. “It makes them more susceptible to other addictions.”

She said many students think e-cigarettes are nicotine free, but almost every brand contains the addictive drug in some form or another. For instance, one Juul pod contains the same amount of nicotine as an entire pack of cigarettes, Steer said. Juul contains nicotine salts, which emphasizes the rush the user gets.

“It gives a similar rush to what a traditional cigarette gives,” Steer said.

In addition, a Juul lasts longer than a cigarette. 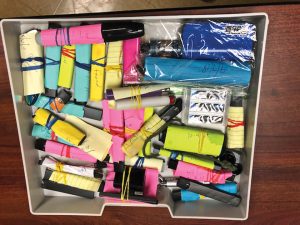 There’s perhaps no better representation of the growth of e-cigarettes among local youth than this picture of the e-cigarettes confiscated this fall at one local school. Image submitted by Emily Steer.

However, many kids think they are only inhaling harmless water vapor.

“It’s like taking a can of hairspray and spraying it directly into your lungs,” Steer said.

While the growth of vaping has escaped many parents’ attention, it has not escaped the scrutiny of the traditional tobacco companies, who are buying in big time. On Dec. 20, Altria—the parent company of Phillip Morris—paid $38-billion for a 35-percent stake in Juul.

Steer is a former smoker herself. She started smoking at age 13, and she knows how hard it can be to quit. She said she has a sense of deja vu watching tobacco companies market e-cigarettes in almost exactly the same way they marketed cigarettes 20 years ago.

With one crucial difference: today, e-cigarette makers have a direct pipeline to teenagers via social media. Many manufacturers pay so-called “influencers,” social media users with large amounts of followers, to advertise their products. Steer said the first student to hide a Juul inside a Sharpie container was hailed online as a “genius.”

Steer said she and other anti-nicotine advocates are fighting an uphill battle. For every $1 spent by the state, local and federal government to turn people away from nicotine, Altria and the other manufacturers spend $14 to market their products, she said.

Ultimately, it’s going to be up to parents, many of whom may be unaware their children are Juuling.

“Parents need to be aware of what’s in their child’s backpack,” Steer said. “They need to let their children know vaping is not a safe alternative. They need to talk to their kids and let them know it’s not safe.”

Here’s a list of signs a kid may be Juuling, courtesy of raisingteenstoday.com.

With the Juul product available in 16 different flavors, many of which are sweet and/or fruity, be on the lookout for an unexplainable, sweet scent which may indicate your child is Juuling. (Keep in mind that Juuls create far less of a vapor  or “cloud” than traditional e-cigarettes, so it may be more difficult to detect the scent.)

If you come across an unusual looking USB flash drive, often with holes on one end (the mouthpiece), chances are it’s a Juul and not an ordinary flash drive.

Some e-cigarette users suddenly find themselves developing sensitivity to caffeine. So, if your teen used to be hitting Starbucks regularly or chugging Red Bulls and is now suddenly passing on their favorite caffeinated drinks, this could be a red flag.

Dehydration, often described by vapers as dry or cotton mouth is actually a fairly common side effect of Juuling and vaping in general.  Propylene glycol, one of the ingredients in e-liquid, is the primary cause of the dehydration. The substance has been shown to absorb and hold in water molecules, preventing them from being absorbed into the body. Therefore, if you notice your teen drinking more than they typically do or you happen to notice other signs of dehydration such as dark circles under their eyes, you may want to dive a little deeper to determine the cause.

Typically, when a person is Juuling they exhale the vapor through their nose which can cause the inside of their nostrils to become dried triggering random nosebleeds. The chemical in the e-liquid, propylene glycol, is a dehydrating chemical that strips the moisture from the inside of the nose. So, if your child is suddenly experiencing nosebleeds, it probably deserves more attention to determine the cause.

According to a 2017 article in Science News for Students, entitled “Concerns Explode Over New Health Risks of Vaping,” researchers are now linking e-cigarettes with mouth wounds that won’t heel and smoker’s cough. The vapors disrupt the immune system which can have harsh effects on human cells. Keep your eye on your child if they complain of sores in their mouth or begin to show signs of an unexplained cough.