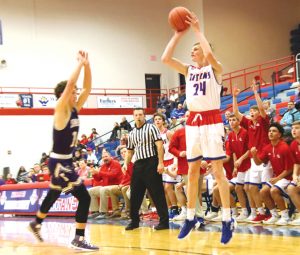 Senior Luke Dean spots up and hits one of his three triples against Somerset on Saturday, Dec. 22. Dean finished with 12 points.

The Mercer County Titans started the Clash of the Titans tournament on a three-game losing streak. Fast-forward four days, and they come out of the tournament 2-1, with a thrilling 84-78 overtime victory over Somerset on Saturday, Dec. 22.

Here is a recap of their tournament.

This game couldn’t have gotten off to a worse start for the Titans. They trailed 23-10 after the first quarter due to turnovers and some missed shots.

The first half belonged to Somerset, as they took a 39-27 lead at the end of the half on a buzzer-beating three pointer by Jackson Cooper.

The second half was a much different story, thanks to senior Luke Dean.

Dean was on fire in the third quarter, scoring 10 of his 12 points in the period, including three straight threes from behind the arc to keep the score within two late in the third.

Senior Carter Baughman has another impressive game. He scored a game-high 26 points, to go along with three rebounds, three assists and three steals.

Junior Jamisen Lewis was the last Titan in double figures with 18 points, to go along with two rebounds, two assists and two steals.

Drakeford, Baughman and Lewis make the Titans go and having other players step up, like Dean, makes the Titans a dangerous team moving forward.

“I’m going to be really honest. The way the season has been going, we had no business winning that basketball game. That speaks to the resiliency of our kids because they’ve had every opportunity this year where things have gone the wrong way, that tonight would have been one of those things where we’re back down the same road again,” said Head Coach Josh Hamlin. “We came in the locker room, and I’ll give them credit when we were down 12 at half, everyone was positive. We had a lot of people speaking up and holding people accountable.”

After Baughman missed a game-winning shot at the end of regulation, the Titans took a stand and owned the overtime period.

It was a full team win for the Titans, a win that they needed very badly moving forward.

“We had some conversations with some kids, and one of the things that we said we have to get back to is having fun,” said Hamlin.

The Titans took part in a friendly dodgeball game at the previous practice and Hamlin said seeing the kids smile and have fun was big for them.

“A big pillar in our program is love. We just have to get back to trusting one another and everything will take care of itself,” he said.

Following a win that ended their three-game losing streak, the Titans (3-6) lost a tough region game on Thursday, Dec. 20, at the hands of the Lincoln County Patriots (6-3), by a final score of 58-41.

The Titans played a solid game in the first two quarters and ended the half trailing by one.

Lewis was the top scorer for the Titans with 11 points.

The third quarter was the difference in this game. The Patriots scored 15 points, while the Titans had four points and 11 turnovers in eight minutes.

“That third quarter kind of got away from us. Either we play a really good first half and a really bad third or fourth quarter. We’re putting two quarters together, sometimes maybe two and a half or three, but we’re not putting a whole game together,” said Head Coach Josh Hamlin. “A lot of those turnovers in the third quarter were just because of us. That’s what we’ve really preached to our guys. In a lot of these games, Mercer is beating Mercer.”

When asked about the Titans greatest obstacle at the moment coach Hamlin didn’t say scoring, defense, or rebounding. He simply said, “we’re not being ourselves. We’ve got to get out of our own way. We’ve got to have more confidence in ourselves and that goes for players, coaching staff and everyone included.”

The Titans have had a rough start in region play this season, starting 2-4, against one of the toughest regions in the state according to Hamlin.

“We play in a really tough region, I think it’s one of the top three or four in the state. You’ve got good teams, good coaches even hall of fame coaches. It’s one of those things that is unforgiving,” said Hamlin.

The Titans have now dropped four of their last five games.

After dropping three games in a row, something the Titans (3-5) haven’t been used to in the past few season, bounced back with a 67-47 victory over the Rockcastle County Rockets (2-5) on Wednesday,  Dec. 19, in the first round of the Clash of the Titans Tournament.

After leaving the previous game against Wayne County with a scary fall, Baughman returned to the court and never missed a beat.

He scored 18 points, to go along with three rebounds, four assists and two steals.

Lewis was the last of two Titans in double-digits with 10 points. He also grabbed three rebounds to go along with three assists.

The game couldn’t have started off any better for the Titans. The Rockets received a technical foul in warmups and Baughman nailed two free throws before tip-off.

Mercer County held a 34-16 lead at halftime, and never really looked back.

A couple underclassmen came in and were able to make a solid contribution for Head Coach Josh Hamlin.