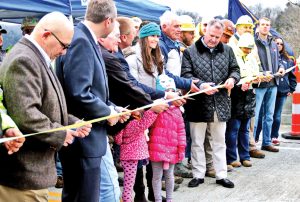 Webb was taking a look over the brand new Kennedy Mill Bridge shortly before its grand opening on Dec. 21.

Webb was hardly alone in thinking he’d not live long enough to see a replacement. The bridge, which was built before Herrington Lake was even created, was considered obsolete by the state for decades. There seemed to be a competition among those in attendance to see who has waited longer for a new bridge. Thirty years. Forty years.

The winner, at least at the grand opening, was former Kentucky Secretary of Transportation Calvin Grayson, 94, who came to see the new bridge finally open for traffic.

“I wouldn’t have missed today for anything,” said Grayson. “I’m just glad the good Lord let me live long enough.”

Grayson worked for the highway department for over half a century. 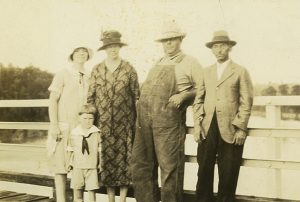 “I caught a lot of flack for not building this bridge,” he recalled.

Grayson said he tried, but the state never approved the funds because school buses didn’t use the bridge.

“This is a great day,” said Mercer County Judge-Executive Milward Dedman at the grand opening ceremony.

Dedman looked over at Kelly Baker, the chief district engineer for District 7 of the Kentucky Transportation Cabinet, Department of Highways. Dedman said he liked talking to Baker, but “I’ll be glad I’ll never get another call from you telling me the bridge is closed.”

The completion date for the replacement—which was originally budgeted at $20.28 million but finally came to $31.7-million, including  change orders and a $1.5-million early completion incentive—kept getting pushed back, from April 2016 to January 2017 and finally to November 2019. 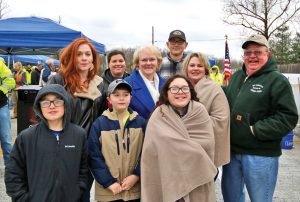 When construction finally started, the contractor, Walsh Construction Inc. of Chicago, faced myriad problems, from the weather—in June, torrential downpours forced Walsh to stop work on the Mercer County side—to the geography. The water is over 200 feet deep at the construction site.

“It was the most technically challenging bridge foundation we’ve ever worked on,” said Joel Halterman, the senior project manager for Walsh.

And the people in attendance were thankful for all of their hard work. Almost every time Walsh’s name was mentioned on Friday, a round of applause broke out.

“Sometimes if I wasn’t working, I could keep up with the job on Facebook,” Eyres told the crowd.

Workers have spent the last week hauling 70 loads of equipment and material off the bridge, getting it ready for traffic.

Eyres and the rest of his crew are being sent off to other jobs, but he had one more thing to say before he left: