City Bans Parking On North Side Of Pheasant Drive 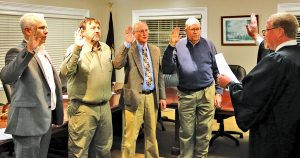 A local man is asking the Harrodsburg City Commission to reconsider their commitment to spend $1-million to build a road for Campbellsville University.

At the commission’s last meeting in November, the City of Harrodsburg entered a tentative agreement with Campbellsville to invest $1 million in cash and in kind contributions over five years to build a 1.5-mile road to connect the current campus with other university owned properties, including their residence hall. Wes Carter, associate vice president for university outreach, asked the city to commit to building the road as part of Campbellsville’s plan to make the university campus—formally the Harrodsburg Conover Education Center—an autonomous four-year college with its own board of chancellors within the university system. But first, the university wanted a commitment from the City of Harrodsburg.

Gus Faith said he was uncomfortable with public money being used to build infrastructure for a private development, especially one such as Campbellsville, which is exempt from paying property taxes. He said the city was “crossing a line.”

“I object to taxpayers putting up $1-million to build a road to benefit a private development,” Faith said. “I don’t know if that’s a proper use of taxpayers’ money.”

He said usually developers build their own infrastructure, which is then deeded over to the city after development is complete. By building the road for Campbellsville, the city was walking a “slippery slope” Faith said.

He said his problem was not with Campbellsville.

“They’re a good outfit,” he said “I think they’re so viable they don’t need $1-million in taxpayers’ money.”

Commissioner Scott Moseley, who, at the last meeting, moved to commit $1-million over the next five years as long as the agreement proved to be legal, said the city was not investing money in Campbellsville, rather, it was a reinvestment in Harrodsburg.

Moseley said he’d been approached by a financier who wanted to develop a hotel along the road. The commissioner said the university’s plans—which include constructing a 33,000 square foot athletic complex, two soccer fields and a second residential hall over the next 12-15 months—would bring thousands of people to the city.

Commissioner Marvin “Bubby” Isham said the city had held several meetings and done research before moving forward. He said it was the first opportunity Harrodsburg had for growth since he began serving on the commission.

“We just feel like we’ve got to do something,” Isham said.

Commissioner Charlie Mattingly concurred, saying, “If the citizens want this city to grow, we’ve got to offer this incentive to Campbellsville.”

Faith said he didn’t doubt the commissioners wanted Harrodsburg to grow, but he still had his doubts about the legality of the commitment. He said he’s spoken with former City Attorney Doug Greenburg, who told the commission at the last meeting that, “ Any taxpayer can file a lawsuit to set this aside.”

Faith said any developer who approached the city could make the same argument the university had.

“Where do you say no?” Faith asked. “When do you stop giving public money to private development?”

“I would just ask you to consider the legalities of it—to consider the ethics of it,” he said. “You’ve got to treat everyone fairly or it all falls apart.”

Monday night was the last meeting for Long, who lost his bid for reelection last month. He canceled the commission’s last meeting, which was scheduled for Christmas Eve. If necessary, the commission will hold a special-called meeting before the end of the year.

The commission said their good-byes to Long, who served as mayor for eight years and as city commissioner for over 17 years.

“I want to thank Eddie Long from the bottom of my heart,” said Commissioner Isham. The other commissioners also thanked Long for his service.

“I just want to know if you all voted for me,” joked Long.

The mayor was also thanked for his service by Mayor-elect Art Freeman, who was sworn in by Judge Jeff Dotson before the city meeting began.

“You have done a good job. The city’s in better shape in finances and infrastructure than it’s ever been,” Freeman said. “I’m going to need your advice and counsel and your friendship.”

“I wish all of you all the luck,” Long said.

The commissioners also extended their condolences to Leo Vaughn, the former supervisor of public works for the City of Harrodsburg, who was forced to retire after 30 years because he’d been diagnosed with stage IV colon cancer. Vaughn passed away last week.

Long recalled that he had hired Vaughn during his first term as a city commissioner.

“He taught me a lot,” said Commissioner Mattingly. “Keep his family in your prayers.”