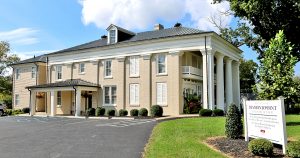 Mike Willand, the executive director of the Harrodsburg-Mercer County Industrial Development Authority, has received a raise and a letter of recommendation from the authority’s board of directors.

The executive director of the Harrodsburg-Mercer County Industrial Development Authority has received a raise.

Mike Willand, who works part-time, has received a raise from $30,000 to $34,000 a year, according to John Trisler, chairman of the industrial development authority board of directors. The board voted unanimously to approve the measure, and added a letter of recommendation as well, Trisler said.

At their regular meeting on Nov. 20, Willand apprised the board on his activities over the past several months.

In September, over 170 seniors from Burgin Independent and Mercer County High Schools participated in the fourth annual Senior Industry Day, which Willand planned in collaboration with local industry, education, and volunteers. The students toured local factories, where they received information about local companies, career tracks and what it takes to succeed in life after high school.

Willand said he hopes to start working with students earlier in their academic careers.

“We’re in discussion about doing this with sophomores instead of seniors,” he said.

Willand also participated at a consulting event hosted by the Kentucky Crossroads Regional Economic Development Coalition at Wilderness Trace Distillery in October. He said everyone was impressed with the gift bags he assembled, which consisted solely of products made here in Mercer County, including the Beaumont Inn, Olde Towne Distillery and Lemon’s Mill Brewery.

“We’re a small county, so if we’re going to do something, we need to do it well,” Willand said.

In November, Willand hosted the industry appreciation luncheon at Beaumont Inn for 43 representatives of local industries and businesses.

“It’s a good way to show this board is reaching out,” Willand said.

He said he’s also met with some of Mercer County’s newest businesses.

“We basically deal with larger industry, but we are very, very happy they’re here,” Willand said.

He said he’d spoken with Harrodsburg Mayor-elect Art Freeman about the possibility of offering tax incentives. Willand said it was going to take cooperation between government and businesses in order to grow Mercer’s economy.

“You have to have teamwork,” Willand said.

The next meeting of the Harrodsburg-Mercer County Industrial Development Authority is scheduled for Tuesday, Jan. 22, 2019, at 11:30 a.m. at the Diamond Point Welcome Center.

The Harrodsburg-Mercer County Tourist Commission received three Traverse Awards for Excellence in Tourism Marketing from the Kentucky Travel Industry Association during the 2018 conference.

At the tourist commission board of directors meeting on Nov. 21, Executive Director Karen P. Hackett said the commission earned three awards: a gold award for advertising at Rupp Arena and two bronze awards for marketing.

Hackett also gave the board an update on the wayfinding signs. She said shop drawings of the signs were submitted to the Kentucky Transportation Cabinet in October. She said state engineers were working to determine the correct height for the anchors and posts. She said the engineers had already visited possible locations and checked for underground lines.

The tourist commission is the first agency to apply under the state’s new signage standards. Hackett said she thinks the state will permit at least 30 signs to be installed around the area to direct travelers to local attractions.

Hackett said it’s possible the signs will be manufactured in house by the state, which would save money. She said $50,000 was budgeted for the wayfinding project, and the state is estimating it will cost about $60,000.

“There are still a lot of unanswered questions,” Hackett said.

The next meeting of the Harrodsburg-Mercer County Tourist Commission will be Wednesday, Dec. 19, at 8 a.m.