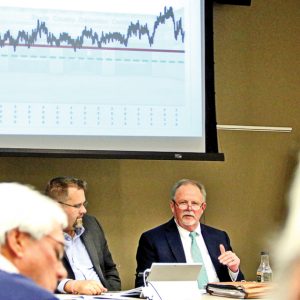 Eric Chambers and Kenneth Ray, consultants with Brandstetter Carroll, go over their jail study with county officials and the public.

The public got a chance to go over the results of a recently completed study of the Boyle County Detention Center as well as the local criminal justice system with the authors of the study.

The authors—Allen Beck, Kenneth Ray and Eric Chambers of Brandstetter Carroll Inc.—presented their findings to the public on Thursday at the Inter-County Energy building in Danville.

The audience learned that Mercer and Boyle Counties would need to build a new 450-bed jail which would cost over $34 million. To expand and bring the current jail up to current national standards would cost almost $36 million.

The authors also recommended the counties look into building a three-phase treatment center. The initial “detox” phase facility would cost an estimated $2.4 million, a 30-day drug treatment program would be another $2.4 million and a third facility that would provide training and life skills would cost $2.3 million.

But, the authors counseled the audience, without serious and substantive changes to the way the local judicial system processes inmates, even a 450-bed jail might not be enough.

The study blames the explosion in the jail population on slow felony case processing, an apparent refusal to set non-financial bonds for low-level offenders and offenders having their bonds revoked and being rearrested after being indicted by grand jury.

None of the local judges agreed to be interviewed by the study’s authors, nor have they participated in meetings of the Criminal Justice Coordinating Council, a group made up of local justice officials which was founded last year. Some Boyle County officials wondered how they could make decisions when judges refused to participate.

“In my experience, a federal judge has a little more authority than a local judge,” said Kenneth Ray.

Ray is not just a consultant, he’s a federal court monitor who makes sure that jails abide by federal court rulings. Ray has repeatedly warned county officials that the Boyle County Detention Center is at risk of a federal lawsuit. Ray said the American Civil Liberties Union and the U.S. Department of Justice “have got the cross-hairs on the rural jails” across the nation.

The Eighth Amendment of the U.S. Constitution prohibits the federal government from imposing excessive bail, excessive fines or “cruel and unusual” punishments. The U.S. Supreme Court has ruled that this amendment also applies to states.

If the two counties were sued, a federal judge—not local officials or taxpayers—would be in charge of the jail. Ray said it would end up costing more than if the counties did it right the first time.

Population at the detention center has been trending lower lately. It was 250 on Tuesday morning, according to a check of the jail website, down from over 400 last year, which the authors attribute to attorneys pursuing non-financial and lower financial bonds for their clients.

But even at 250, the detention center is still overcrowded and has no room to isolate inmates suffering from illness or substance abuse-related issues.

Ray also said the decline in inmate population would probably not last.

In the study, the consultants call for reducing the use of financial bonds, ending the practice of re-jailing offenders after indictment, ending the blanket use of “no bond” for defendants in the “Rocket Docket” program, creating a state-certified drug court, using alternatives to re-jailing when defendants violate their bonds and increasing the use of diversion and deferred prosecution.

If the counties do not make any changes, the study says they will need 756 beds to hold inmates within 30 years, although Ray cautioned against relying on such long range projections.

“The farther out you get with a forecast, the more unreliable it is,” Ray said. “You’d have the highest incarceration rate on the planet.”

Instead, local leaders need to focus on bringing the jail up to what he called “constitutional levels” which would reduce the communities’ exposure to a federal lawsuit.

“The jail design is working against you,” Ray said. “It is costing you a mint to operate.”

Eric Chambers, who studied conditions at the jail, listed problems that needed to be fixed. Because of the lack of space, corridors are used for storage. The bathrooms are not up to current standards and there is deterioration in the concrete leading to cracks.

“There are no easy fixes,” Chambers said. “This thing didn’t happen overnight. It’s not going to change overnight.”

After the meeting, Mercer County Attorney Ted Dean said it was possible the counties could save money on rehabbing the jail by getting state waivers. But he said that was not likely. The state already refused to waive requirements when the jail committee wanted to convert a recreation area into additional inmate housing.

“I’m happy to see the turnout and the thoughtful feedback,” he said. “Hopefully we’ll be able to move forward as two communities.”

The committee hired Brandstetter Carroll in 2017 to study the jail and offer recommendations. The counties paid $75,000 for the study.

The public can read the full report on Boyle County’s website, boyleky.com, and clicking on “Boyle-Mercer County Detention Center Study.”