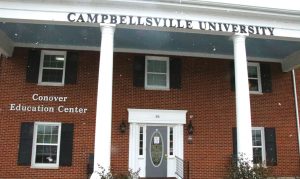 The City of Harrodsburg has entered a tentative agreement with Campbellsville University to invest not more than $1 million to help expand the Harrodsburg campus. According to a memorandum of understanding that is still being worked out, the city will make payments in cash and in kind contributions over five years to build a 1.5-mile road to connect the current campus with other university owned property, including their residence hall. If the cost of the road exceeds that amount, Campbellsville will take care of the difference, said Wes Carter, associate vice president for university outreach.

At the last city commission meeting, Carter asked the city to commit to building the road as part of Campbellsville’s plan to construct a 33,000 square foot athletic complex. The university plans to break ground on the complex the first of the year, Carter said. They also plan to build two soccer fields and a second residential hall over the next 12-15 months. The ultimate goal, he said, is to make the Campbellsville campus—formally the Harrodsburg Conover Education Center—an autonomous four-year college with its own board of chancellors within the Campbellsville system. But first, the university wanted a commitment from the City of Harrodsburg.

Carter said there has been no effort to start a new four-year college in Kentucky since Northern Kentucky University started in 1948. He said Campbellsville is ready to spend $5-million over the next two years in expanding the Harrodsburg campus. But first, Carter wanted a formal vote on the road.

“This is the very first piece that launches all this activity and all this growth,” Carter said.

Commissioner Scott Moseley moved to commit $1-million over the next five years as long as the agreement proved to be legal. The commitment is not just for money, it also includes in kind contributions by the city. Commissioner Marvin “Bubby” Isham seconded the motion. Isham said the investment would fuel economic growth in Harrodsburg. The motion passed unanimously with even Mayor Eddie Long—who only votes to break ties—saying “aye.”

At the invitation of Mayor Eddie Long, many in attendance addressed the commission. Most spoke in favor of expanding the campus, but not all. Adele Greenburg, wife of City Attorney Doug Greenburg, noted St. Catharine College in Springfield had shut down in 2016 while Eastern Kentucky University shut down its satellite campus in Danville last year. In a time when other schools are struggling to find funding for academic programs, Greenburg said expanding the Harrodsburg campus “doesn’t make sense.”

“I hope it works, but I think we need to take our time,” Greenburg said.

Carter seemed to bristle at the comparison between Campbellsville and St. Catharine, which closed down after the federal government began withholding financial assistance to students enrolled in undergraduate degree programs added from 2011 to 2014.

“We should be very, very careful about what we’re comparing it to,” he said.

“What better investment can we make?” Anness asked. “I think this is going to help us attract more businesses.”

Rich Newsome, East Kentucky region president at Community Trust Bank, said there are companies, including restaurants and hotels, waiting to move into Harrodsburg. He guaranteed they would come if the campus expanded. “We’ve got a huge opportunity to move forward,” Newsome said. “I’m in favor of this and I hope you are as well.”

When the motion passed, the crowd broke out in applause, but there are still issues that remain to be ironed out. First, it’s not clear whether the city can enter the agreement. City Attorney Doug Greenburg said under state law, cities can only fund public entities, not private, and Campbellsville is a private college.

“Any taxpayer can file a lawsuit to set this aside,” Greenburg said.

In other business, the Harrodsburg City Commission said goodbye to Doug Greenburg, who is retiring as city attorney. “I want to thank everybody,” Greenburg said. “I only wish the best for Harrodsburg.”

The city has not yet hired Greenburg’s replacement.

The Commission will interview candidates for the economic development director’s position on Thursday, Nov. 29, from 9 a.m. to 5:30 p.m.

The next meeting of the Harrodsburg City Commission will be Monday, Dec. 10, at 7 p.m.