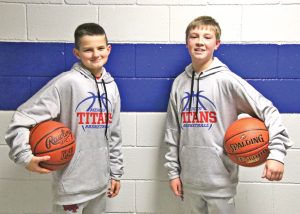 Braylon Ellis and Andrew Tatum. pictured after a King Middle School basketball game, share the challenge of managing their diabetes while being active in sports.

November is diabetes awareness month and type one diabetes is more common than most people realize.

Type-one diabetes is an autoimmune disease in which the body’s immune system mistakenly destroys insulin-producing cells in the pancreas. The cause is unknown and there is no cure, according to the Mayo Clinic, but the disease can be managed.

According to the Americans with Disabilities Act website, around 40,000 children are diagnosed with the autoimmune disease every year, including children here in Mercer County.

Braylon Ellis is an 11-year-old King Middle School student who loves sports. He was diagnosed with type-one diabetes at the age of three.

“We took him to a walk in clinic after he was excessively thirsty,” said Braylon’s mother, Megan Ellis.

“His sister also has diabetes and we remembered the symptoms,” Megan Ellis said.

Today, Braylon is playing sports and living a full life thanks to an insulin pump.

“It is about management,” said Megan Ellis. “We have to watch what he eats and adjust his insulin accordingly.”

She said they have to wake up at night and give him snacks sometimes because Braylon’s needs are constantly changing.

“Andrew was diagnosed while we were on vacation this past summer,” said Andrew’s mother, Paula Tatum. “He didn’t have very many symptoms but he was excessively thirsty with a sticky throat.”

Despite Andrew’s diagnosis, he remains active. He recently underwent a sports physical with no problems.

“It is important for people to know theses kids are normal and live normal lives,” Paula Tatum said. “Also if you see any signs don’t hesitate to get checked.”

Diagnosis of type-one diabetes can be difficult. Symptoms may appear rapidly and there isn’t a textbook case. Some kids react differently than others.

Connor True experienced rapid weight loss before being diagnosed in the fourth grade.

“He was at school and laid down on the sidewalk during recess until the teacher came to get him,” recalled Connor’s mother, Mindy True. “He was very confused and didn’t know who or what was going on.”

After a stay at UK Kentucky Children’s Hospital, the family began the management steps for her son.

“It is a big change for the whole family,” Mindy True said.

True said that after Connor was diagnosed, other parents reached out to her to offer their support.

“These were kids I had spent time with and I never known anything,” True said. “It is very common in Mercer County but there are still a lot of misconceptions about the disease.”

She also credits connections she made online with helping her cope with the adjustment. Whenever she was tired or didn’t know the answer there was always someone available who had already gone through it.

“There are groups available to help you adjust on Facebook,” True said.

Connor now attends Lindsey Wilson College on a golf scholarship and manages the disease himself. Mindy True is proud of his self-reliance, but a mother can’t help but worry.

“I still worry about my son and will always worry,” said True. “Management is important and he has done a good job.”