Learning The Meaning Of Christmas Along With Scrooge At Ragged Edge 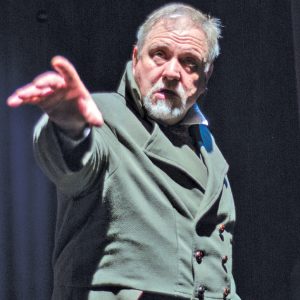 Allan Barlow returns to the stage at the Ragged Edge Community Theatre in his one-man production of Charles Dickens’ “A Christmas Carol,” which runs Dec. 7–9.

Barlow, the managing director at Ragged Edge, created the show in 2003. He plays 24 roles in the show, everyone from Ebenezer Scrooge to Tiny Tim.

To prepare, Barlow said he has to “brush up” by running through the show a few times.

“I try to listen to myself closely to make sure the dialects are right. I use a half dozen different British dialects, all pitched and placed differently for each of the two dozen characters in the show.”

It is key that each character sounds completely different from the other so that the audience can follow along, he said.

“When there are two or more characters speaking, each one must have a specific posture and place on stage in order to avoid confusion,” Barlow said. “Once I have done all that, I just step onto the stage and let the story pick me up and carry me along. Even after all this time it is a story I never get tired of telling.”

Dickens wrote “A Christmas Carol” in 1843 and by February of the next year, there were already eight adaptations on the stage, according to Les Standiford, author of “The Man Who Invented Christmas: How Charles Dickens’s A Christmas Carol Rescued His Career and Revived Our Holiday Spirits.”

The timeless story of how old Scrooge goes from a “squeezing, wrenching, grasping, scraping, clutching, covetous old sinner,” to “as good a friend, as good a master, and as good a man, as the good old city knew” has become the most adapted work by far for Dickens, who gave solo readings of the tale 127 times during his lifetime.

The story is credited by Standiford and others with reviving the celebration of Christmas, which was viewed as a pagan ritual by many English Protestants, including the Pilgrims of Massachusetts, who banned the holiday in 1659. Christmas wasn’t even a national holiday here in the U.S. until 1870, according to NewEngland.com.

Tickets are $12. Purchase advance tickets on line at raggededgetheatre.org or by calling 734-2389. Tickets can also be purchased at the door the night of the show.