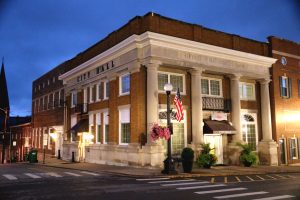 Campbellsville University officials are asking the city commission for $1 million to help them expand the Harrodsburg campus.

Campbellsville University is asking the city of Harrodsburg for $1-million to help them expand. Associate Vice President for the University’s Outreach program, Wes Carter presented a five year plan to   the Harrodsburg City Commission that included a request for $1-million infusion of funds toward building a road and expanding their campus.

The expansion is expected to include an athletic complex that will include a track, another dorm and a 33,000 square foot classroom facility. The road would connect the dorm located behind Kroger to the existing campus on 127.   Carter said the campus is expected to become a 200 acre complex.

“We at Campbellsville want to help people but we are also a powerful economic engine,” said Carter. “We are in the process of getting an economic analysis for the impact we have had on Harrodsburg. The Taylor County economic growth analysis showed growth of 160 million dollars for the county.”

Carter also said that the current buildings at Campbellsville are debt free and the university was listed in the top 200 affordable schools in the United States.

Commissioner Scott Moseley cited the expansion of programs Campbellsville had included such as, HVAC, plumbing, expanded nursing to include nurse practitioner and physical therapy. Moseley also asked about employment statistics. Carter noted that currently they employ 49 full-time and 30 part-time but are expected to add over 100 employees in the next two years and over 200 employees within the five year plan. Mosley added that more students attending Campbellsville meant more shopping, eating and working locally.

Carter said that Campbellsville enrolls over 13,000 students in four states with the Harrodsburg facility currently at capacity, the five year plan would   add over 400 additional students to the local campus. Building of the road is scheduled for January 2019.

Mayor Eddie Long said that the commission would aggressively pursue funding ideas to approve the request.