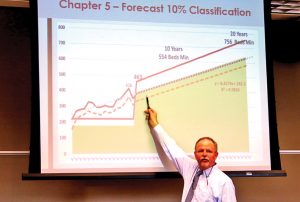 FILE PHOTO: Kenneth Ray, one of the authors of a report on overcrowding at Boyle County Detention Center, points at a projection of how big a new jail would need to be if current practices continue.

A study of the Boyle County Detention Center and the way the criminal justice system operates in Boyle and Mercer Counties is complete, and the authors will discuss the results with the public at a meeting at the end of the month.

Officials have already been given a few of the findings from the 349-page report, which contains 13 chapters and six appendices. The authors of the report blame the population growth at the jail on three factors: slow felony case processing, an apparent refusal to set non-financial bonds for low level offenders and offenders having their bonds revoked and being rearrested after being indicted by grand jury.

Eric Chambers, one of the consultants with Brandstetter Carroll who helped compile the report, presented the committee with three options on how to move forward: either renovate and expand the current jail, build a new 450-bed jail or build a standalone treatment facility.

The treatment facility is discussed in chapter 10 of the study. The facility, which would be open to the public as well as offenders on diversion programs, would allow addicts to detox, receive treatment and prepare for reintegration into the community through learning job skills.

“This would be something that could be used as an alternative to incarceration, but it’s also something the general public could have access to,” Chambers told the members of the Mercer-Boyle County Joint Jail Committee at their meeting held last Friday in Boyle County.

The committee hired Brandstetter Carroll in 2017 to study the jail and offer recommendations. The counties are paying $75,000 for the study.

Officials hope to hold a meeting so the consultants can present their findings to the public. The meeting has been scheduled for Thursday, Nov. 29, but the time and location are still to be determined.