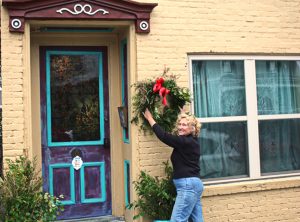 A new addition to the home tour is Ruby’s Jewel Box, located at 117 East Poplar Street. Tiny in size but not in personality, this stop is owned by Gemma Ziegler and was built 130 years ago by Julia Cecil Dalton, who purchased the 15-feet by 88-feet lot located next to the Assembly Presbyterian Church.

The building is thought to have served as office for Dr. Dalton, husband to Julia Dalton, until his death in 1902.

This space has served many different functions. From 1961 until 1971, it was home to the Harrodsburg First Federal Savings and Loan Company, followed by Ruby’s Jewelry Store from 1976 to 1984.

For the next three decades, it provided space for other commercial enterprises, including a gift shop and an antique store. Now it stands as a bed and breakfast in the heart of downtown Harrodsburg.

Ziegler has owned the property for about three years and says it has stayed booked from April to October through AirBnB.

“We have a real close knit family and we have all worked on this place to make it what it is,” said Ziegler. “We keep adding pieces that we find to give it unique charm.”

Ruby’s Jewel box does have unique charm and a homey atmosphere. The bright colors and warm rugs bring the beautiful architecture in to full view.

The holiday home tour has seven stops. One additional place included is the “Big Spring,” a boiling or artesian spring that was almost one fourth of an acre in 1774. James Harrod and his men made the area their permanent camp while surveying the land that would become Harrodsburg.

A rustic campsite will be set up at Big Spring to replicate Harrod’s settlement, complete with reenactors from the Friends of the Fort. Hot cider and stories of James Harrod will also be shared.

When the land was purchased to develop Anderson-Dean Community Park, it was decided this early home was of significant historical value and should not be torn down. Instead, it was renovated and adapted for modern use in September 2003, and now serves as a museum of Mercer County History and the office for the park.

Join the Holiday Homes Tour on Saturday, Dec. 1, from 11 a.m. to 5 p.m. and learn more about the history of Mercer County.