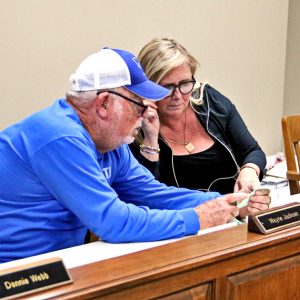 Virgil Monroe and Donna Holiday of the Mercer County Board of Elections reviewed ballots after the polls closed Tuesday night.

Mayor Eddie Long has won his campaign for reelection, but it was close. Long defeated his opponent, write-in candidate Art Freeman, by four votes, 1,033 to 1,029.

Those are the unofficial results provided by the Mercer County Board of Elections, who will submit the vote tally to the secretary of state’s office.

Even though it’s only a four vote margin, it will be up to Freeman to contest the results. Kentucky state law does not provide for recounts like Florida, where recounts are mandatory if the margin of victory between candidates is 0.5 percent or less. A candidate who wants to contest election results must first ask for a recanvass, in which officials recheck vote tallies, making sure the totals taken from the voting machines are correct, and retabulate absentee votes. The county would cover the expenses incurred.

After that, a candidate could sue for a recount. In that case, the circuit judge would order the voting machines reopened and tested to make sure votes were tallied correctly. In order to sue for a recount, the candidate must first request a recanvass. The candidate who sued for the recount pays the legal expenses. Election officials had to count over a thousand write-in votes cast in different races, including the Burgin City Council, the Harrodsburg City Commission and the Harrodsburg mayor race.

That turnout helped power a lot of incumbents to easy wins, with most collecting up to 60-percent of the vote.

All other county officers, including the judge-executive, county attorney circuit court clerk and coroner, ran unopposed.

Larry Yeager and Billy G. Montgomery, who represent the second and third districts on the Mercer County Board of Education, won reelection.

In other races, Rep. Kim King, a Republican who has served the 55th district, which includes Mercer County, in the Kentucky House of Representatives since 2011, defeated Cathy Carter, a retired teacher and Democrat.

Pamela R. Goodwine, who was challenging Rob Johnson to serve as judge of the fifth district court of appeals, lost Mercer County, but won the overall race.

For full election results, check out this week’s issue of the Harrodsburg Herald.