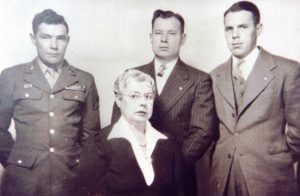 The Whittinghill Brothers were representative of Mercer County families who sent multiple sons into combat. Pictured left to right are: Grover Whittinghill, one of the 66 Harrodsburg tankers at Bataan; mother Lillian Hendren Whittinghill, who taught at Dean School and Cornishville Grade School for decades; James Whittinghill and Robert Whittinghill, who also served in World War II. (Photo Submitted)

I remember that Sunday morning at Cornishville Christian Church so well. The summer weather was sunny and extremely hot. The sanctuary wasn’t air conditioned at the time so the two screened front doors and all of the windows were propped open. My father, Marcus Prather, was preaching with a louder voice that day.

As fate would have it, I needed to go outside to the car for something during the sermon. A man was sitting on the front steps listening…just listening. I spoke to him and invited him inside to worship with us. He nodded his head and remained on the steps.

At Sunday dinner I told my parents about Grover Whittinghill being outside during the sermon. My dad told me he was there quite often. (That explained the louder voice from the pulpit.) My mother said we would never understand the tortures Mr. Whittinghill and the other men suffered on the Bataan Death March. Since then, I have made it my mission to learn more about our friends and neighbors who served, and those who continue to serve, in the military. 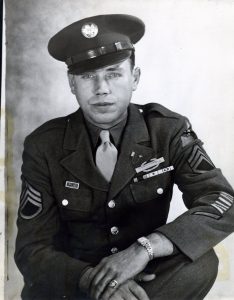 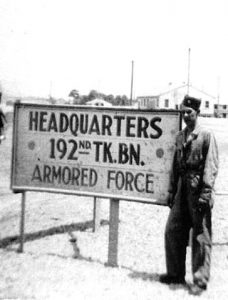 Sergeant William Clinton Alford began his training for the 192nd tank battalion in Fort Knox in the early 1940s and was assigned to the Battalion Headquarters reconnaissance platoon. (Photo Submitted) 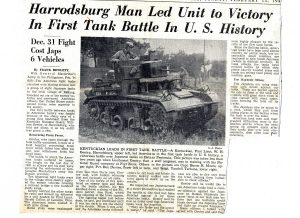 On New Year’s Eve 1941, Lt. William H. Gentry of Harrodsburg led the first tank battle against the Japanese. Ten U.S. tanks knocked out six Japanese tanks. Within a week, the Battle of Bataan was joined, the first extended ground engagement between the U.S. and Japan.