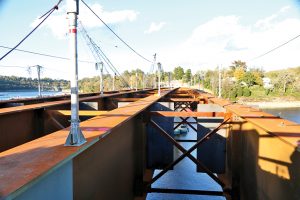 Walsh Construction Company has finished assembling the mammoth girders—the biggest measuring 136-feet long and weighing 179,000 pounds each—that make up the skeleton of the new Kennedy Mill Bridge. They are now paving the approach to the bridge on the Mercer County side and will work through the winter pouring concrete.

K.U. is doing this to help accommodate construction of the replacement for the Kennedy Mill Bridge.

“They typically go to 725 feet around this time,” said Walsh Construction Company Project Manager Kevin J. Buch, P.E. “They are planning to hold at 727 feet to help facilitate construction through the winter months.”

For the past month, Walsh has been moving mammoth girders into place with cranes. With that phase of construction finished, the contractor has been paving the approach to the bridge on the Mercer County side.

Buch said they are working on installing decking and will work through the winter pouring concrete. The contractor—and the motorists and marinas who rely on the bridge—are hoping for a mild winter.

While much local attention has been focused on the replacement of Kennedy Mill Bridge, which connects Mercer and Garrard Counties, the Kentucky Transportation Cabinet has released a list naming more than 1,000 bridges throughout the Commonwealth being restored through the Bridging Kentucky program.

According to a KYTC press release, Bridging Kentucky is one of the nation’s most aggressive bridge rehabilitation and replacement programs. It represents an unprecedented commitment by Gov. Matt Bevin and the Kentucky General Assembly to improve the safety and soundness of bridges throughout Kentucky. This list of critical structures includes state, county and municipal bridges that are rated in poor condition or have restricted weight limits. More than 60 of the bridges on the list are currently closed to traffic.

The program’s initial focus will be to rehab or replace more than 340 bridges.

Last week, KYTC representatives discussed the Bridging Kentucky program with industry officials during a forum in Elizabethtown. Similar events are planned in four other locations in late October and early November.

The goal of the forums is to inform and collect important feedback primarily from contractors, subcontractors, disadvantaged business enterprises and utility firms that may participate in the six-year program. Through these conversations with industry stakeholders, KYTC and the Bridging Kentucky program team expect to gain insights that will help efficiently manage the unique program and educate businesses about the business opportunities being created by the $700 million bridge program.

Last month, the state agreed to provide an incentive to Walsh to speed up construction of the replacement for the Kennedy Mill Bridge. The contractor hopes to have the new span in place this spring, Buch said.