Members of Tank Company D—better known as the Harrodsburg Tankers—standing at attention during a training exercise in Fort Knox in 1937.

The 103rd Brigade Support Battalion Company, Kentucky Army National Guard, the city of Harrodsburg and VFW Post 6935 is honoring the 66 Harrodsburg Tankers, who endured the Bataan Death March in 1942, with a day of events on Saturday, Nov. 10, that includes a “ruck march,” a parade, vehicle displays—including a Blackhawk helicopter—and a cannon salute.

“The strength of the National Guard is the local community,” said Lt. Col. John F. Harvey, commander of the 103rd. “As Guardsmen, we live, thrive and serve in the community. We are excited to celebrate Harrodsburg’s history of service and sacrifice with the Bataan Memorial event.”

The day will start at 8 a.m. with a 6.6-mile “ruck march.” A “ruck march” is a foot march by a soldier wearing full combat uniform, including a 35-pound rucksack. They’re usually at least 10 miles long, but this one is 6.6 miles to honor the 66 Tankers. Civilians can march without the pack, but those willing to undergo the loaded march can win trophies. Preregistration for the ruck march ends on Wednesday, Oct. 31, but last minute marchers can register on the day of the event starting at 7 a.m. 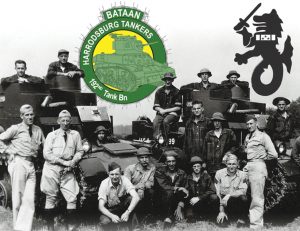 The opening ceremony with a rifle and cannon salute and guest speaker Brigadier Gen. Scott A. Campbell, deputy adjutant general for the Kentucky Army National Guard, starts at 11 a.m. The parade starts on Lexington Street at 1 p.m., traveling from Old Fort Harrod State Park to the top of Main Street. Anyone can participate in the parade in order to honor veterans and registration is free. The top three participants will be awarded trophies. Registration is encouraged by Wednesday, Oct. 31, but late arrivals will be accepted. Around 1:15 p.m., a UH-60 Blackhawk will land next to the fort in the open parking lot and will be on display for the remainder of the day.

Old Fort Harrod will have World War II costumes. A documentary will be played on the hour at the Fort Mansion Museum and WWII memorabilia will be displayed at the Lincoln Marriage Temple.

Children are welcome to climb on the trucks on display, including a high mobility multipurpose wheeled vehicle, a light medium tactical vehicle and a palletized load system truck after the parade.

“This event is an opportunity to reconnect with the community, while remembering the heroes that served and lived in the community before us,” said Lt. Col. Harvey. “When the event is over in November, it will still be important for the National Guard and for Harrodsburg to continue to stay connected and grow our relationship.”