Taylor And Morris Join Tourist Board 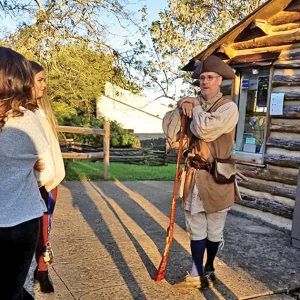 The money, which is being drawn from the tourist commission’s operational reserve account, is to be used to help the park prepare for Harrodsburg’s 250th anniversary celebration—which is six years away—as well as help preserve the fort for future generations.

In a prepared statement, Karen Hackett, executive director of the tourist commission, called the fort “the city’s most recognizable and economically important tourist-related resource.”

“The fort is an essential component of our local tourism industry because of its tremendous appeal to tourists, and is one of the most significant properties we have within the city limits,” Hackett said.

The fort is a recreation of the settlement laid out by Capt. James Harrod and 32 of his men in 1774. It was built in 1927 and has become a symbol of the city. The original walls were replaced in 1989. A symbol of Harrodsburg’s long past, the fort needs extensive repairs if it’s going to have a future. 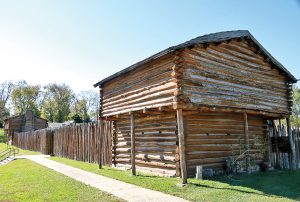 Old Fort Harrod State Park Manager David Coleman said one of the top priorities for the park is replacing the stockade walls.

Coleman said the park is hoping to raise even more money to help get the fort ready for the 250th birthday, including replacing the stockade walls, rewiring the fort and rebuilding the chimneys. He thanked the tourist commission and the community for their help.

“This is certainly a substantial step in the right direction,” Coleman said.

It’s not the first time the tourist commission, which has been under fire recently for not doing enough to promote local events, has pledged money to the park. The commission pledged money to repair the roof on the ticket booth at the amphitheater. That led to the return of outdoor drama at the fort.

However, the state shut down the James Harrod Conference Center—a.k.a. the Black Box—which was used to store costumes because of mold in 2017. Plans to continue the drama fell through earlier this year when the state condemned parts of the backstage area, leading Ragged Edge Community Theatre and Old Fort Harrod State Park to suspend production of “James Harrod: The Battle For Kentucky.”

As for the black box, “That’s a different story,” Coleman said. He said he didn’t know when the conference center will be razed and replaced. He said that is on the park’s master list.

The donation is a result of the tourist commission executive committee’s search for projects that would not just promote tourism, but also preserve Harrodsburg’s heritage.

She said the board members—including the newest members, Tia Taylor, who represents Bright Leaf Golf Resort, and Mark Morris, who represents the Mercer County Chamber of Commerce—agreed “a substantial contribution was essential to help preserve the legacy of the community and one of the state’s well-known tourist attractions that embodies our identity and represents a culture and heritage no other area can claim.”

The tourist commission also agreed to provide a $500 sponsorship to Ragged Edge.

The next meeting of the Harrodsburg-Mercer County Tourist Commission will be held on Wednesday, Nov. 21, at 8 a.m. at the Diamond Point Welcome Center.