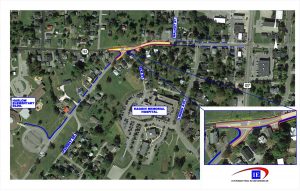 The current plan for what the state plans to do to the U.S. 68–Keuntucky 152 intersection, one of the most dangerous in Harrodsburg.

Nothing moves fast when it comes to transportation infrastructure. Just ask Julie Wagner, executive director of the Harrodsburg First Main Street Program, who has been working on a sidewalk project since 2014. In that time, Wagner has secured funding through the federal Transportation Alternatives Program and the Safe Routes to School program to improve and construct sidewalks along the U.S. 68 corridor to connect western residential neighborhoods to schools as well as essential services, such as medical and shopping. But no one is ready to break out the shovels just yet.

The big holdup has been the Kentucky Transportation Cabinet, which wants to redesign the State Route 152-U.S. 68 intersection to make it compliant with current state standards and redesign Mooreland Avenue around Walnut Street to make sure the crown of the road meets state standards.

“None of us like the plan, but that’s what the state’s approved,” Wagner said.

She told the Harrodsburg City Council the state has eliminated parts of the project, including installing curbs and gutters which would help drainage.

Wagner asked the commission’s permission to address some of the issues with Shane Tucker of the Transportation Cabinet’s district 7 office.

“If we do that, it will delay the project,” Wagner said.

The next step will be to get right of way easements from 14 property owners. Wagner said she hopes to have a public meeting at the Mercer County Schools central office sometime in November.

One piece of land will need to come from the school district. The commission authorized the mayor to send a formal request for the school district to donate the land. If the land is donated, it would count toward the matching donation the city needs to make in order to secure the funding.

Wagner could not say when work will begin, but she did say when construction finally begins, the state said they will keep a lane open for nearby property owners.

The city commission has been under fire for what many feel is a poor rate of economic growth in Harrodsburg. Mayor Long said he thinks creating the new position, as well as the commission’s efforts to improve the city’s infrastructure, will help the local economy grow.

“Everything we’ve done—the new water plant, the new sewer plant and paving streets—gets us ready to go,” he said. “That’s part of what we’ve been doing over the last seven years.”

The mayor was authorized to sign an agreement with Kentucky Engineering Group for engineering services for the U.S. 127/bypass sewer extension project.

“I think we can safely say Harrodsburg is open for business,” Long said.

The next meeting of the Harrodsburg City Commission has been moved to Tuesday, Nov. 13, at 7 p.m.