Voters Get Chance To Meet Candidates At Monday Night’s Forum 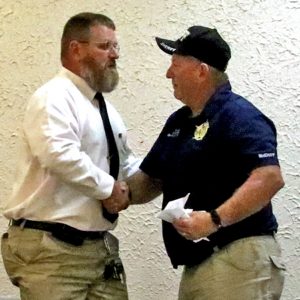 They fielded questions regarding the necessity of a fee based website, their experience with property valuation, what criteria they use in property valuation and if property bills should increase when the assessment of the property has not increased.

The closing comments for the candidates were as follows:

“I’m an everyday citizen of Mercer County who wants to play a small part in changing the county…I promise to do the job of the PVA to the best of my ability,” said Elliott.

“Your choice for the office of property valuation administrator should not be decided on political party affiliation. The candidate you elect should be the most qualified with the most experience and treats each property fairly with no bias or prejudice, I submit to you tonight that I am that candidate,” said Best.

The candidates fielded questions about what they would do to help protect against active shooters, how to evaluate when SWAT would be needed in a situation, what can be done about the homeless in Mercer County and how to battle the drug epidemic.

“I believe we need to hire a dedicated narcotics drug investigator to lead in eradicating the drug problem in this county,” said Bugg.

“We work on the drug problem every day. Not only from the street, not only from our investigations, but we work with every one of our schools developing drug programs,” said Kelty.

The candidates for jailer—Republican incumbent Brett “Chambo” Chamberlain and his Democratic challenger, William Moore, fielded questions about the possibility of building a jail in Mercer County, the use of jail transport vehicles and the impact of heroin on the office of the jailer.

When asked what actions they would take to make sure all prisoners are treated fairly, they responded:

“I will make sure all prisoners are secure and loaded safely back and forth to court and to jail,” said Moore.

“There are statutes and mandates for KRS for each and every aspect of prisoner transport and restraint. It all starts with training, and I have 29 years of training with the Department of Corrections,” said Chamberlain.

The candidates running for magistrate of district 4—Democratic incumbent Donnie Webb and his Republican challenger George Jones—were asked what they believed were the three biggest issues facing Mercer County. Jones said the narcotics problem, infrastructure issues and the number of boil water advisories for Burgin, as well as the lack of a jail.

Webb described the difficulties of paying the cost of the jail without raising taxes, continuing to cut corners to keep taxes down and trying to support the sheriff’s department.

Other questions included how to combat Burgin’s recent flooding problems, the candidates’ primary reasons for running for office and how to determine when it is necessary to raise taxes. 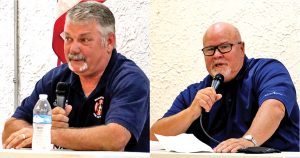 “I really don’t see any pros for ending the constable office….I will be there to help law enforcement….It’s got nothing to do with Republican or Democrat, it has to do with helping the people,” said Collier.

“The pros for having a constable….is having someone who knows the local community and is able to assist local law enforcement, they know the roads and best routes to get someplace. The cons for the constables would be if they don’t have training…If they violate someone’s civil rights then the county would be susceptible,” said Peyton.

The forum was sponsored by the Mercer County Republican and Democratic parties, WHBN, Best Sound Around, Rockensmith Sounds and The Harrodsburg Herald.

Mercer residents will cast their votes on Tuesday, Nov. 6 to determine who will fill the offices in local, state and national government.