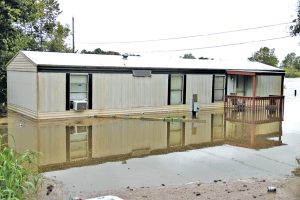 This trailer, which belongs to Herman Jasper, was among the many homes in Burgin damaged during last month’s catastrophic flooding. Many residents blame the slow trickle of disaster relief from the state and federal government on the fact that the Burgin city government has not filed an audit since 2011.

Despite Mayor George Hensley’s assurances to the contrary, some Burgin citizens believe the city has not received any help from either the state or federal government after last month’s catastrophic flooding because Burgin has not completed an audit since 2011.

Mayor Hensley said no one at either the state or federal level has mentioned the missing audits to him.

“I haven’t jeopardized the city in no way,” he said.

According to the Kentucky Emergency Management website, monetary thresholds set by the state government have to be met before the state will issue aid. Burgin has not met that threshold. However, many of the citizens who have been impacted by the recent flooding believe more aid would be forthcoming if the city’s finances were in order.

“We have people who need the funding who are not getting it,” said Councilman Sindicat “Sid” Dunn.

Currently, the Department of Local Government is withholding $112,000 in state road aid because of the missing audits, said spokesperson Kirsten Delemarter. “That money can be used for construction or repair of streets,” Delemarter said. “Technically, if there’s flooding damage, those funds could be used for that.”

She said the money could be used to install culverts or pipes under the streets in order to help with drainage.

Hensley said the state will release the funds if Burgin turns in audits for 2016, 2017 and 2018. Last month, the city hired Jones and Associates to handle the audits. The last auditor employed by the city, Craig Butler of Kerbaugh, Rodes and Butler resigned. City officials said Butler quit because he was receiving too many phone calls about the city’s audit from Councilman Dunn.

Dunn said the only reason he called the former auditor was because residents had asked him what was happening.

Hensley said city hall is working on getting some kind of aid and hopefully solving the problem.

“We’re not sitting over here twiddling our thumbs and drinking coffee,” he said.

Burgin spent $30,000 pumping out the floodwater from the area around Water Street, Hensley said. In addition, he said he’s spoken with aides for U.S. Rep. Brett Guthrie and state Sen. Tom Buford as well as other government officials, including representatives from the Bluegrass Area Development District, who are assembling a package of options on how to deal with the flooding.

Flooding is not a new problem for Burgin. But Hensley said this year’s flooding has been the worst he’s seen in the five decades he’s worked for the city.

Part of it is rain. According to the National Weather Service, Mercer County has seen 53.17 inches of rain in 2018, coming close to the wettest year since 1890.

But Hensley and many Burgin residents believe the issue has been caused by blasting done by contractors hired by the Mercer County Sanitation District to install Burgin’s new sewer system. They believe explosives blocked the sinkhole the city has relied on for drainage for decades.

“I think we all know what’s causing the flooding, but that’s neither here nor there. You have to prove it,” Hensley said.

He said the Department of Water has not issued their finding on what is causing the flooding, nor has an engineering firm finished their report on how to remove storm water from the area around Water Street now that the city’s sinkhole no longer appears to drain.

“This is a long process,” Hensley said. “There’s government regulations and things we have to follow.”

But many Burgin residents seem convinced the process would be working a lot more smoothly if the city had filed its audits on time.

Some of the residents wondered aloud if a protest—either at the state capital or at the current headquarters of the Republic Party of Mercer County—would speed up the process.

Hensley said it is a political issue, caused by the lack of bipartisan cooperation at the state level, and that the quickest way to solve it is in the voting booth.

“I’m not happy about politicians either,” said Hensley, who is currently running for reelection. “But you can punch that other button.”

In other business, the Burgin City Council learned Hensley had been cleared after an ethics investigation. The mayor introduced a letter from the Greater Mercer County Board of Ethics, who were investigating a complaint against the mayor filed in April. In the letter, the board wrote that they had “found no violation” and were officially closing the investigation. They recommended the Burgin city government “review its bidding procedures, to eliminate confusion and prevent any future issues.”