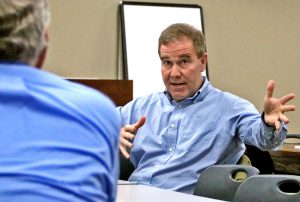 Mercer County Attorney Ted Dean is pushing back against criticism of the local justice system in a new jail study. “We’ve been dealing with a facility that’s been overcrowded for over a decade.”

A report compiled by Brandstetter Carroll Inc. said, without fundamental changes in the criminal justice system—specifically the circuit and district courts which serve both counties—a jail more than three times the size of the current one would be needed in the next 20 years.

Recommendations for what to do about the current facility were not completed when officials got a look at the first draft of that report last month. However, Eric Chambers, a consultant with Brandstetter Carroll, said the report would soon be finished, and Chambers was recommending the counties build a new 450-bed facility with the potential to expand to 750 beds.

The report blames the population growth at Boyle County Detention Center on three factors: slow felony case processing, an apparent refusal to set non-financial bonds for low level offenders and offenders having their bonds revoked and being rearrested after being indicted by grand jury.

Much of the blame for this was placed on Judges Peckler and Dotson, who did not take part in the study. Mercer County Judge-Executive Milward Dedman has expressed frustration with the report, which Dedman said points out problems but not solutions.

“I still don’t have a clear vision of where to go,” Dedman said.

It’s estimated the new jail—which would have space for medical treatment, isolation units, as well as minimum, medium and maximum security cells—could cost up to $40 million, but the actual cost estimate hasn’t been completed yet.

Regardless, Dedman said the report leaves him and other members of the joint jail committee in the situation of making long term decisions based on decisions made by judges who may not still be on the bench when the new jail is finished. In Kentucky, trial judges are elected to eight-year terms.

“Do you base your decision on the present court system, and go and build a huge new jail?” Dedman wondered aloud. “And then in four years, if these judges don’t run again and you have a different set of judges, then you’ve overbuilt.”

Dedman and Boyle County Judge-Executive Harold McKinney have invited the judges to answer some of the concerns listed in the report. However, there is a possibility the judges may not say anything. In addition to not participating in the study, they have also not responded to requests from both the Harrodsburg Herald and the Danville Advocate Messenger for a comment.

Asked what could be done if the judges continue to refuse to participate, McKinney said, “We move on.”

Mercer County Attorney Ted Dean pushed back against the criticism of the justice system. Dean called it “a little self-serving” to lay all the blame on the judges.

“We’ve been dealing with a facility that’s been overcrowded for over a decade,” Dean said. “It’s laid out very poorly for our purposes.”

He noted that, even though the jail population has declined from 400 at its peak last year to a little over 250, there has been no corresponding reduction in jail costs.

The prosecutor noted that the assessment for drug offenders relies on self-reporting. As a result, few offenders are found to have substance abuse issues when they return to court.

The deadline for officials to make comments and corrections to the report is two weeks from now. The final report should be ready next month.

The next meeting of the joint jail committee will be Friday, Nov. 9, at 1:30 p.m. at the Boyle County Courthouse in Danville.