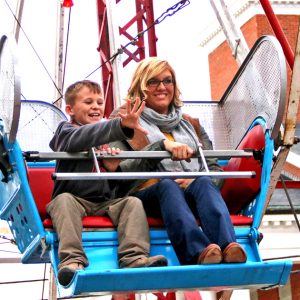 Caleb and Ashley Brown had a great time on the Ferris wheel on Main Street, which was a big hit at this year’s Oktoberfest.

Despite the cold weather and rain, organizers and merchants said they were happy with how Oktoberfest 2018 turned out.

“It was the coldest autumn Saturday since the 1970s and Harrodsburg didn’t let that stop them from Oktoberfest!” said Julie Wagner, executive director of the Harrodsburg First Main Street Program. “We were amazed at the number of people who grabbed a scarf and headed downtown.”

Wagner said she could not estimate how many attended this year’s festival, but said the cold weather did not have the impact on attendance she initially feared it would. “Losing a day to rain is always disappointing but weather is one thing we cannot control,” Wagner said.

Most merchants said crowds were not as big as last year, but the cold weather seemed to draw visitors inside.

“It was wonderful,” said Jennifer Kazimer, who, with her husband, Tim, owns the Kentucky Fudge Company. “The number of transactions was almost identical but the amounts were bigger.” 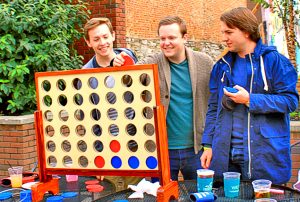 This is the second year where Sunday events had to be cancelled due to inclement weather.

“I think you have to schedule three days to get two good days,” said Kazimer, who said Oktoberfest is the biggest weekend out of the year for her restaurant.

Shirley Sprague, who, with her husband, Jim, owns the Beehive Gift Shop, called Oktoberfest “good advertising.” She said one Harrodsburg couple walked into her store and asked her how long she had been open. “We’ve been in business for 20 years!” Sprague said.

Everyone agreed the biggest hit was the Ferris wheel on Main Street. Wagner said the attraction has been on her wish list since she saw a 1902 photo of one on Main Street.

“We just knew it was something that we had to do,” Wagner said. On the whole, she was happy with how things went with the kid’s area, Kinderland, especially with sponsors to help underwrite the cost.

How will they top the ferris wheel next year? “I already have one or two things percolating in my mind,” Wagner said. 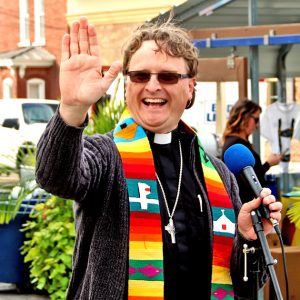 “When you hear those oom-pah bands, that just makes it sound like Oktoberfest,” Sampson said. “We need that German vibe.”

Once again, there were gremlins in the power system despite precautions taken by the organizers. “If we could keep improving on the power grid by adding drops along each block, it would really benefit this event and hopefully others in the future,” Wagner said.

Harrodsburg First has invested in power upgrades downtown as well as equipment and decorations. Despite the potential for losing money, Wagner said they are planning to have Oktoberfest again next year.

“As long as we continue to improve on financial and community support, I foresee this becoming a signature event for Harrodsburg,” Wagner said.

October is a busy month for Harrodsburg First. On Saturday, Oct. 27, the group will hold the Spooktacular Halloween Parade at 7 p.m. On Wednesday, Oct. 31, it will be time for the Night of the Great Pumpkin from 5:30 p.m. through 7:30 p.m. Main Street will be closed for all traffic while local businesses distribute candy for children aged 12 and under.

If you’d like to participate, contact Julie Wagner online at downtownharrodsburg.com or via email at harrrodsburgfirst@gmail.com or on the phone at 734-6811.