The Mercer County Titans (4-4) travelled to Campbellsville to take on the Taylor County Cardinals (6-1) in a battle for the district championship and home-field advantage throughout the playoffs.

The Cardinals were able to reclaim the lead in the second half and hold off the Titans for a 26-21 victory.

“We are a million miles ahead of where we were this time last year. Our kids played one of their best games in the past four seasons,” said Head Coach David Buchanan. “Unfortunately, it wasn’t enough against a very good Taylor County team.”

Wes Oliver led the Cardinals on the ground with 147 rushing yards, but Tre Goodin did the damage. He scored three touchdowns to go with 68 yards on the ground, including two in the second half to hold off the Titans for the win.

Junior quarterback Kaelin Drakeford led the Titans with two touchdowns, one through the air and one on the ground. He went 10-for-16 with 144 passing yards along with 33 rushing yards.

Junior Malachi Yulee led the Titans in rushing with 67 yards on 14 carries and one touchdown.

Sophomore Trevor Allen led his team in receiving with three catches and 74 yards, but junior Dillon Warren caught the lone touchdown through the air on a 15-yard catch from Drakeford late in the game.

After forcing a punt on the first Cardinal possession, the Titans started their first drive at their own 35-yard line. The drive ended with a three-yard touchdown run by Yulee to give the Titans an early 7-0 lead. The score was set up by a 55-yard reception by Allen a couple plays prior.

On the following drive, the Titan defense came up big again.

Senior Blake Russell brought down Oliver in the backfield to force a punt.

The Titans got the ball back and were looking to add to their lead, but were forced to punt.

Sophomore punter Noah Davis kicked it all the way to the Cardinal two-yard line to pin Taylor County back into their own endzone.

After forcing a third and long at the Titan 44-yard line, Mercer was flagged for unsportsmanlike conduct to give Taylor County a first down at the Titan 26-yard line.

Goodin scored his first touchdown on the ground from seven yards out. The Cardinals missed the extra point and the Titans held a 7-6 lead midway through the second quarter.

The Titans looked to answer, but were forced to punt. Davis pinned the Cardinals back to their own 19-yard line.

The Titan defense came up big yet again. After a big reception by DeJohn Irvin down on the Titan 28-yard line, the Titans held strong and forced a turnover on downs.

This time, the Titans were able to capitalize on the forced turnover with 1:57 left in the first half.

After a first down reception by senior Jon Jon Logue, Drakeford kept it 33 yards right through the middle of the Taylor County defense for the score. The Titans took a 14-6 lead into the locker room.

Mercer received the second-half kickoff, but weren’t able to make anything out of the drive and were forced to punt.

The Cardinals took over at their own 40-yard line. A couple plays later, Oliver found pay dirt on a 58-yard scamper. Taylor County went for two, but were unable to convert, making the score 14-12 with nine minutes left in the third quarter.

The Cardinals forced a turnover on downs on the next Titan possession, and Goodin capped off the drive with a four-yard touchdown run. The Cardinals held a 20-14 lead heading into the fourth quarter.

The Titans were forced to punt again, but their defense was able to get the ball back forcing another punt of their own.

The Titans picked the worst time for their first turnover. Taylor County recovered a fumble on the first play of the drive and were set up nicely at their 33-yard line.

After a personal foul penalty, Goodin ran in his third touchdown of the game to put the Cardinals ahead 26-14.

The Titans added on a late score on a 15-yard catch by Dillon Warren over three defenders, but Taylor County got a couple first downs on their next drive and ran the clock out.

Despite the loss, the Titans will still get to host a playoff game.

“We have a great place to play high school football in a town that loves Friday nights” said Buchanan. “Hopefully we can win our first one and work our way back to Alvis Johnson Field the Friday after Thanksgiving.”

Buchanan talked about the upcoming bye week and how he will prepare his team.

“Our focus going forward will be on making us better as a team heading into the playoffs,” he said. “We will also look at some things for playing Boyle County and some areas that need improvement before we hit November.”

The Titans are on a bye this week, but will be back on Friday, Oct. 26, when they travel to take on the Boyle County Rebels at 7:30 p.m. 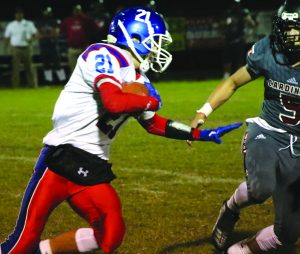 Junior Dillon Warren (21) takes a return down the sideline and attempts a to get past Taylor County’s Jack Herron (5) on Friday, Oct. 12. The Cardinals defeated the Titans 26-21 in a thrilling football game. 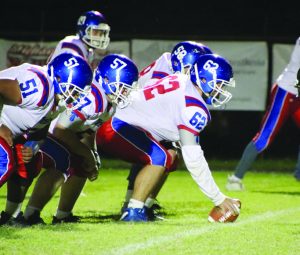 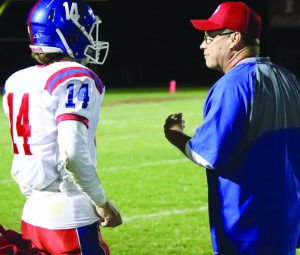 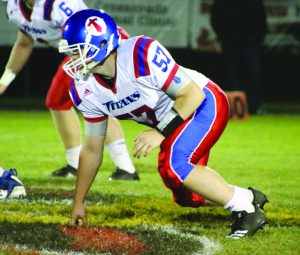 Junior Isaiah Morris-Kirkpatrick lines up on the defensive line against Taylor County on Friday, Oct. 12. 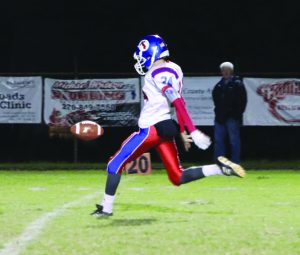 Sophomore punter Noah Davis uses all his power on a fourth down play against Taylor County on Friday, Oct. 12. 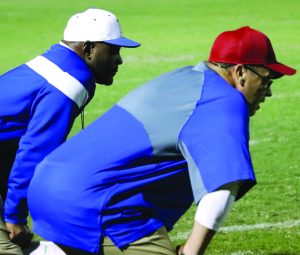