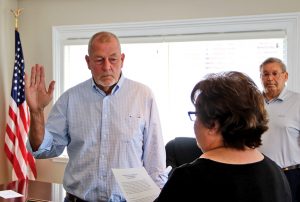 Kerry Anness is sworn in as a member of the Harrodsburg City Commission by City Clerk Kim Stinnett as Mayor Eddie Long watches.

Anness, who served as city commissioner from 2009 to 2012, will assume Coleman’s duties in overseeing the water treatment plant and the water and wastewater maintenance departments.

Coleman, who was elected to the city commission in 2016, was forced to step down by state law, which requires retirees to cease all employment with agencies participating with any of the different pension funds operating under the Kentucky Retirement System, including the City of Harrodsburg and Bluegrass Community Action Partnership, where Coleman served as director of community services.

In order to retain his pension, he must observe a three month break in service before he can return to work with either agency. Coleman, who is running unopposed for reelection to the city commission, hopes the state will allow him to return in December.

The next meeting of the Harrodsburg City Commission will be held at 7 p.m. on Monday, Oct. 8.

The Burgin City Council set their tax rates last week in two special called meetings. The rate the council approved at last month’s regular meeting was revised to .191 per $100 in assessed value for real property, down from .195 last year, and .1527 per $100 in assessed value for personal property, down from .3316 from last year. According to Burgin Treasurer Michelle Russell, property values were up last year, enabling the city to enact a lower rate. City revenues would be up $100,000 this year, Russell estimated.

In other business, the city commission moved their meeting to Tuesday, Oct. 16, at 6:30 p.m.