It’s been a tough start to the season for the Mercer County Lady Titans (2-3) volleyball team.

They have lost three out of their first five, but four out of those five matches have been decided in the fourth or fifth set.

Junior Jaclyn Devine led the Lady Titans in aces and kills with six each, junior Brinkley Prewitt was the top player in digs with 13 and Devine and junior Zoë Yeast were tied for the team lead in blocks with four each.

Mercer County was looking for their first winning streak of the season after defeating Garrard County in straight sets on Friday, Aug. 21, but the Lady Jaguars earned the road victory.

Despite the loss, Head Coach Lynn Flach was encouraged by her team’s fight.

“We played a very hard fought game. They worked together as a team and played some of the best volleyball we have seen them play this season,” she said. “I saw a lot of good things out of Jaclyn (Devine). She showed tremendous leadership. Brinkley (Prewitt) and Hanna (Blevins) played some excellent volleyball and really stepped up for the team. I am proud of how our team played.”

The Lady Titans will try to rebound tonight, Thursday, Sept. 6, when they host Lincoln County at 7 p.m. 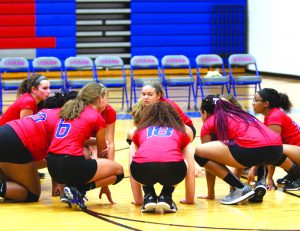 The Lady Titans volleyball team get pumped up before their match up against district rival East Jessamine on Thursday, Aug. 30. (Photo by Julia Weaber)