Junior Jaclyn Devine is a very good volleyball player and student. Devine dominated the court last season as well as the classroom leading the Titans to a district runner-up and accumulating a 3.8 GPA through two years of high school.

The last two seasons have been tough for the Mercer County Lady Titans volleyball team; finishing second in district play both seasons. This year, they are looking to take the next step and win the district.

Last season, the Lady Titans fell to West Jessamine, the team that would become 12th region and eventually state champions.

Head Coach Lynn Flach has high hopes for this group of girls and expects them to win 80% of their games and advance to the regional tournament. If Mercer can capture the district title, it would be the first in nine years but the ultimate goal is to win the regional tournament, something the Titans have never done.

The key to the Titans success this season is Devine, who Flach is depending upon to lead the team.

Flach knows in order to lead the team Devine must learn to play vocally.

“Jac (Devine) tends to be a quiet leader on the court, but we are working hard with her to become more vocal on the court.  Communication is a huge part of the game, so her improving on being more vocal will only improve her game,” said Flach.

Devine talked about her personal and team goals for this season

“One personal goal I have is to be a better leader and to help the younger girls coming up to be comfortable with their abilities. A goal I want to reach as a team is to just work as a team, even if we’re down 10 points, I still want us to be able to keep our heads high and not blame one another,” said Devine. “Volleyball is such a mental sport. You can’t let one mistake take you out of the game. It hurts you and your team and I just want the team to be headstrong by the end of the season.”

Flach had some very high praise for her star player.

“Jac is the most complete all-around high school player I have ever coached. Our team will look to her leadership and abilities on the court to lead us this season,” said Flach.

Devine says volleyball has been instrumental in her life.

“Volleyball means the world to me, and I don’t know what I would do without it. It is no longer just a sport for me, but also my stress reliever. It has helped me become a better teacher. Before volleyball I was really quiet and now I’m more outgoing. I love volleyball so much I want to take it as far as I can, whether that’s playing in college, playing professionally, or coaching in the future, I want volleyball to forever be a part of my life,” said Devine.

You can see the Lady Titan volleyball team in action Monday, Aug. 20 at 7 p.m., when they host Boyle County.

You can catch them again the following day, Tuesday, Aug. 21, when they host Garrard County at 7 p.m. 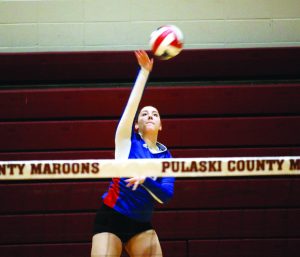 Junior Jaclyn Devine is looking forward to what hopefully is a big 2018 season for her and the Mercer County Lady Titans volley team. (Photo by Arpan Dixit)