Nathan Tatum is senior at Mercer County Senior High School. He is an outstanding student, a member of the high school leadership program and a three-sport athlete. His love for athletics has grown from the time he could walk to now, and this upcoming year is his last opportunity to compete athletically in school.

Tatum has built a reputation as a standout athlete and a leader in every sport he plays. Not many high school athletes letter in three varsity sports, and not many of those could do it while achieving academic all-state.

“Nathan was a big part of our 2017-18 team even though he didn’t play a minute for us due to injury,” said Mercer head basketball coach Josh Hamlin. “He was ay every practice and game. He was always helping guys during practice and games with the little things that he was seeing.”

Hamlin believes when Tatum’s athletic career is over, he could make his way into the coaching ranks.

“Nathan will be a tremendous coach one day if he chooses, and even though he didn’t play a minute last year, his role on our team was as important as anyone’s,” said Hamlin. “Guys like Nathan Tatum make you a better team and a better program. We can’t wait to get Nathan back this year and watch him have an amazing senior season.”

During a playoff football matchup between the Mercer County and East Jessamine, Tatum’s season was sadly cut short. His injury was the single blemish on the clean sheet as the Titans convincingly defeated East Jessamine 46-21.

“I made the tackle, my body went one way my arm stayed back, was caught in the pile, and snapped,” said Tatum.

Tatum suffered a torn UCL, (Ulnar Collateral Ligament), and had surgery  on January 11, which requires quite a lengthy recovery, close to a year.

”All I could think of was my teammates and how I wanted to be out there with them,” said Tatum.

When asked about the road to recovery, Tatum said “it hasn’t been easy and I’m still in the process of getting back to where I was. Physical therapy is something I’m getting pretty used to, and it is by no means fun, but I know I have to go through it to get back to where I wanna be.”

The injury shouldn’t be fully healed until sometime in October which will have him ready just in time for basketball season.

Nathan plans to help out the football team with management this fall.

After his days at Mercer County Senior High School are through, he will attend college, but is undecided about competing athletically. 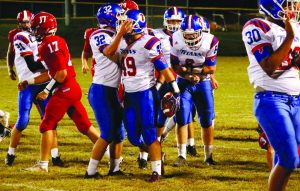 Nathan Tatum (49) celebrates with Robby McClain (32) after recovering a fumble against West Jessamine this past football season. Tatum is a three-sport athlete for the Titans, playing football, basketball and baseball. (Photo by Arpan Dixit)