Fusion Sports has been in business since August 2016, recently moving to a new location right past the railroad tracks on Cornishville Road. They specialize in softball instruction and clinics.

The sports complex provides instruction to kids all the way up to the high school level. When it first started, they only had three to four kids, but now in the summer time, over 30 kids have started getting instruction at the complex.

Michael Shewmaker, along with his wife Cari, own the complex and he talked about the best part of coaching and instructing.

“Getting involved with the kids has been the best part,” he said. “Getting to coach, watch these kids grow and become better players is a true blessing.”

Shewmaker said he and his wife will go attend and watch the players they instruct. He said it was one of the best parts of the job.

He also talked about how business was going since they opened.

“I tell you what, it has been outstanding,” he said. “The support of the community, all the kids and the softball teams have been great.”

Despite being located in Mercer County, Shewmaker said he instructs players who come from Boyle and Lincoln Counties as well.

After coaching, he went on to start softball hitting/pitching lessons and has been doing so for the past three years. Shewmaker retired from the Versailles Police Department in 2011 after 20 years of service.

Shewmaker also has the assistance of his daughter, Tabby.

Tabby has had an unprecedented softball career. She started playing when she was 8-years-old. She started playing varsity softball at the age of 12 and became the Lady Titans’ starting pitcher. During her senior season at Mercer, she was named 12th Region Player of the Year and represented Kentucky in the KHSAA All-Star game against Tennesee. She was in the KHSAA record books 15 times for hitting and pitching. Her jersey was retired when she graduated in 2012. She went on to play college softball at Bellarmine University, playing first and second base. While playing for the Knights, she earned second-team all-conference honors and the coach’s award.

He talked about getting the opportunity to coach and give lessons with his daughter.

“I’ve learned a lot over the years with her, and over that time I learned what to do and how to do it,” he said. “Softball has grown so much in the area since Tabby was playing. It’s great to see the sport grow.”

Shewmaker said his love for the game of softball grew over time, as he was coaching other sports.

“My kids really loved the game so I started coaching. I fell in love with the game when Tabby was playing, but I really do enjoy the instructional part of it. I also love the game of softball because it is so quick and it’s really situational,” he said. “It’s such a short game and it’s fun to be around. Here at the complex I’ll do pitching, but we also do a lot of hitting lessons. With my younger kids, we’ll do a lot of ground work with them.”

Shewmaker said they have trouble doing outfield work at their 10,000 square foot indoor facility, but he will take his kids to Anderson-Dean Community Park to work out the outfield part of the game.

Shewmaker’s wife, Cari, does a lot for the complex.

“I couldn’t have done it without her,” he said.

Cari does the after school program at the complex.

“Kids will come out and she makes sure they do their homework and do activities until their parents are able to come pick them up,” he said.

Shewmaker said his wife takes care of everything.

“She takes care of all the lessons and scheduling,” he said. “I got the easy part of the job. I come out here and teach and coach the kids, but she sets up everything. Without her, I couldn’t do it, there is no way.”

Fusion Sports is located at 765 Cornishville Road. For any questions regarding lessons or the complex, call 613-5585. 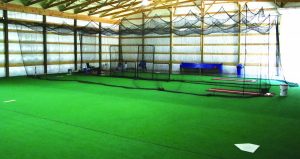 Pictured above is the batting cages and pitching circle inside the Fusion Sports complex. Owner Michael Shewmaker said the complex is still under renovation. (Photo by Arpan Dixit)