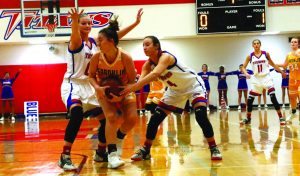 Before facing the likes of Butler, Male and Sacred Heart in the Louisville Invitational Tournament (LIT) at Bellarmine University and the Christian Academy of Louisville, the Mercer County Lady Titans (19-2) had to defeat a familiar opponent.

In a match up of last year’s state championship participants, the Lady Titans stepped on the gas pedal and did not let up the entire night.

Senior Faith Lake led all scorers with 17 points and six rebounds. Senior Seygan Robins, despite not scoring in bunches like she usually does, handed out a game-high seven assists.

Head Coach Chris Souder, who was honored for his 500th career coaching win before the game, talked about the contributions from up and down the lineup against the defending three-time 11th region champions and how he expects everyone on the floor to produce.

“That’s what I’ve told them in the locker room after the game, we base playing time on what we do in practice,” Souder said. “I don’t care what grade they’re in, that has nothing to do with it. Faith (Lake) was huge tonight. She really got us off to a fast start, was really active and that’s her game, and when she’s knocking down the three, she is really good.”

Seventh grader Timberlynn Yeast and eighth grader Love Mays provided big minutes off the bench in the second half. Yeast only scored two points, but was active in the passing lanes and defended, while Mays came in and knocked down two three-pointers on her way to 8 points.

“Like I said before, it doesn’t matter what grade you’re in. We expect whoever is out on the floor to produce and Timberlynn (Yeast) and Love (Mays) have been impressing us everyday in practice and in games.”