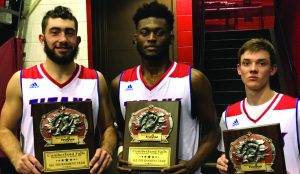 After losing to Corbin in the first round of the Cumberland Falls Invitational Tournament (CFIT), the Mercer County Titans (10-4) basketball team pulled off two close victories over Fleming County and North Hardin and took home third place.

The Titans were without one of their top seniors and three-point shooters, Ty Divine, during the CFIT.

“He (Ty) has won two state championships in track so he’s been in pressure situations so the moment is never too big for him,” said Hamlin, “It was tough not having him for those games, but I’m glad he is back, because he is a floor spacer for our team. It allows us to have four shooters out there on the floor when he is in the game.”

Hamlin said you can’t replicate how important Divine is to the team.

The Titans (8-4) rebounded with a 10-point win over Fleming County (2-10), defeating them by a final score of 90-80 on Friday, Dec. 29. Both teams were coming off losses to the tournament host, the Corbin Redhounds.

It was a match up of two of the state’s top players, Andrew Taylor of Corbin and Trevon Faulkner of Mercer, with the Redhounds (7-2) getting the best of the Titans (8-3) by a final score of 83-68 in the first round of the CFIT on Thursday, Dec. 28.