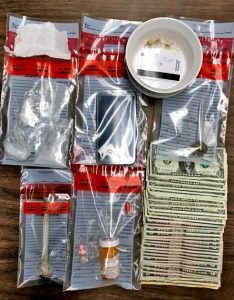 Evidence seized by police include money, drug paraphernalia and drugs

Police have put three people—including one visitor from Alaska—on ice after a drug bust last week. The three are cooling their heels after being caught in a hot car with drugs, money and drug paraphernalia.

In the early morning hours of Wednesday, Nov. 15, Harrodsburg police stopped a car on  U.S. 127 after it was seen crossing the center line.

A check of the registration plate revealed the vehicle had been reported stolen in Ohio. Working with deputies from the Anderson County Sheriff’s Office, the police were able to get the vehicle stopped without incident.

The driver, Richard Aaron Bouma, 36, of Anchorage, Alaska, was arrested and charged with  1st-degree trafficking in methamphetamine  (two counts), 2nd-degree possession of a controlled substance—drug unspecified, 3rd-degree possession of a controlled substance—drug unspecified, tampering with physical evidence, receiving stolen property under $10,000, no operator’s license and possession of drug paraphernalia. Bouma is being held on a $25,000 bond.

Trina Marie McMahan, 34, of Louisville, was arrested and charged with 1st-degree trafficking in methamphetamine, tampering with physical evidence and possession of drug paraphernalia. McMahan is being held on a $15,000 bond.

Robert S. Elrod, 38, of Crestwood, was arrested and charged with tampering with physical evidence. Elrod is being held on a $5,000 bond.

Patrolman Thomas J. Wren made the arrest, with assistance from Patrolman David Patterson.