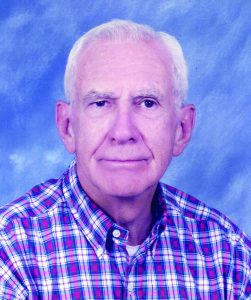 Bob was a member of St. Thomas Catholic Church.

Bob was born at home on Sept. 7, 1932 in Pawtucket, R.I.  He received his B.A. in chemistry in 1953 from Brown University. He also graduated from the Harvard Program for Management Development in the early 1970’s. He served in both the Navy and Marines from 1953-56.  Upon leaving the military he married the love of his life, Phyllis Flanagan in 1956. That year he began a job at Corning Glass Works in Rhode Island.  He worked at Corning until he retired in 1991.  Bob held many different positions at Corning, including 6 years as plant manager in Harrodsburg and over two decades at the corporate headquarters in Corning, N.Y.  At the time of his retirement he was Vice President and Operating Director-Technology Group.  In 1996, he and Phyllis built a house in Tellico Village, Tenn., which quickly became their home.  Here they embraced the supportive community and made some of their closest friends.

Bob was an avid traveler in retirement with Phyllis and continued to travel after she passed away.  He visited all 50 states, all seven continents and over 100 countries.  His last trip was in August, 2017. He visited Iceland, where he had been stationed for a while in the military, Greenland, and Sweden, which was the last European country that he had not yet visited.

He found immense joy in spending time with his children, grandchildren, and great-grandchildren.  Summers were a time for family to gather at his home, enjoy the lake and delicious meals. He traveled with all of his grandchildren and organized a  family reunion in Italy, in 2013, to celebrate his 80th birthday.

At home, Bob was a gourmet cook and an avid collector of Toby jugs.  He also took great joy and companionship in his two cats.

In Corning, he was the area Boy Scouts of America Council President and recipient of the Silver Beaver and St. George Awards.  In Tellico, he was active on the library board and served as president.  He also served on the HOA board, volunteered at STAR riding center and the Good Samaritan Center.

Preceded  in death by: his parents, Natale and Elvira Baldani, by his beloved wife Phyllis, who passed away in 2001 and his sister Delores.