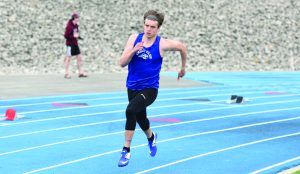 Austin Sparrow has won 3 Mid-South Conference Championships during his time at LWC and looks to add more to the trophy case this season. (Photo submitted)

Austin Sparrow, a graduate of Mercer County Senior High School in 2015, has had quite the success during his track career at Lindsey Wilson College.

In high school, Sparrow was trying to figure out what he wanted to play in college and until his junior year he was determined to play college basketball or football, until he started having success in high school track.

He also tasted success in high school. Sparrow placed second in the region meet his senior year in the 400 and 800 meter dashes. He was also region champion in the 4×800 meter relay his junior and senior year.

Not only is he running track, but Sparrow is also a student assistant for the Lindsey Wilson basketball team.

Sparrow chose Lindsey Wilson because it felt like family to him.

“The coaches, players and teachers made me a priority from day one,” said Sparrow. “Lindsey Wilson was close to home and I was looking for that because of my father’s diagnosis.”

He said his inspiration comes from his father, who was diagnosed with cancer in 2014. He said he has always looked up to him because of his courage, strength and patience and that he’s blessed to have someone that inspirational to so many people as his dad.

“I was blessed to receive multiple offers from NAIA and DII teams all around the country, but I knew I wanted to stay in Kentucky and do something special at a place that was connected with my family.”