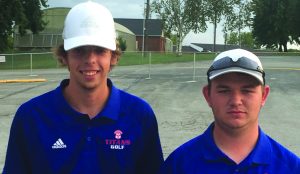 Head coach Jay Anderson has high expectations for the 2017 Mercer County Senior High boys’ golf season. “We’re a senior lead team so I’m expecting my seniors to provide good leadership for our young kids,” said Anderson. “We’ve got some experience, but also a lot of youth.”

Anderson said for the most part, he wants his team to be competitive each and every time out on the golf course. “We want to improve everyday whether it is a practice or a match and just give ourselves an opportunity to win.

Anderson said while the top part of his lineup is set, the bottom half will see some changes throughout the season depending on performance.

He talked about the difficulty of replacing a player like Brennan Walton, who graduated and is now entering his freshman year at Lindsey Wilson College in Columbia. “He left some big shoes to fill,” said Anderson. “But he is still around the program. His leadership and guidance to his former teammates goes a long way.”

Divine, who has been a lifelong golfer, had not played high school golf until this year. Anderson hopes Divine’s golf career will end up like his track career. Divine is a member of the back-to-back state champion Mercer County track team. “I got on to him the other day after seeing him play for the first time because I wish he had played earlier on in his high school career,” said Anderson.

Anderson enjoys coaching the students here at Mercer because they are high quality athletes who strive to get better each time they pick up a golf club. Anderson said they don’t have anyone on the golf team who doesn’t want to be there. Everyone enjoys playing golf whether it is hitting balls at the range or at an actual course.

He knows his team will be competitive night in and night out, but a lot of matches will be decided with the bottom half of the lineup.

Anderson said Boyle County is a team that is circled on their schedule, but the team everyone is trying to beat is back-to-back region 4 winner, Taylor County. “Taylor County won region last year with four sophomores and an eighth grader,” he said. “So they will be really solid competition for us.”