Four vehicles were destroyed but no one was hurt after a crane collapsed Monday morning at the Harrodsburg Wastewater Treatment Plant.

The crane fell around 8 a.m. at the site of the plant’s expansion project along Cornishville Road, said Harrodsburg City Commissioner Marvin “Bubby” Isham, who oversees the treatment plant.

According to Isham, a crane operator employed by Smith Construction was attempting to lift a digester, a large tank that weighs around 30 tons, when the crane collapsed.

“It was just a freak accident,” Isham said.

The operator was not injured in the incident, Isham said. 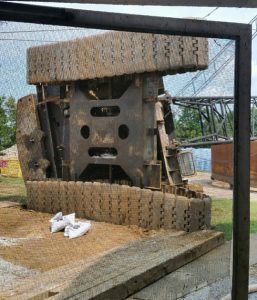 A crane fell over Monday while moving a piece of equipment at the Harrodsburg Wastewater Treatment Plant. No one was injured.