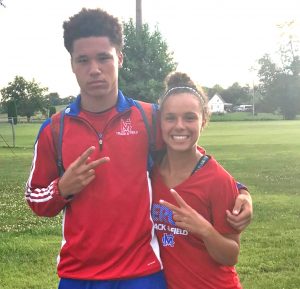 Aaron Johnson (left) and Jasmine Claunch (right) will be competing at the AAU Junior Olympic Games in Michigan from July 19 until August 6. (Photo Submitted)

Two Mercer track standouts will be competing in the AAU Junior Olympic Games in Michigan from July 29 to August 6.

Senior Aaron Johnson and sophomore Jasmine Claunch will be representing Mercer County and look to bring home some hardware, something these two are certainly familiar with. This event will let Johnson and Claunch compete against some of the best track athletes in the nation. College coaches will be in attendance and this event is a tremendous opportunity for these athletes.

Johnson, fresh off winning the state championship in the high jump, 200 and 300 meter hurdles, looks to make his name known around the country as amongst the best in his class. “This means a lot to me because this is the first time I’m able to compete in the Junior Olympics because I was hurt last year with a sprained ankle,” said Johnson. “Most of all, it means a lot because I get to represent my AAU team, KY Elite, and also represent Mercer County.”

Johnson said he has been preparing  with his jump coach. Johnson practices several times a week doing advanced high jump drills, trying to perfect his technique. He will be competing and working on his high jump skills throughout the week.

Claunch, who was on the Lady Titan track team that finished fifth this year at state, their highest finish ever, looks to perfect her craft in the triple jump, an event where Claunch has gotten better each meet as the year went on.

“Competing at this level means all the hard work and dedication is paying off,” said Claunch. “The countless hours of practice and watching track videos has really helped me to this point.”

Claunch was excited to compete against elite athletes from around the country. She has been preparing individually in two aspects: the mental side and the jumping side. “I’m trying to mentally prepare myself for this meet and trying to stay upbeat throughout this whole process,” said Claunch. “I go to the track five days a week to work out and I have been going back to the basics of triple jumping and trying to perfect that.”