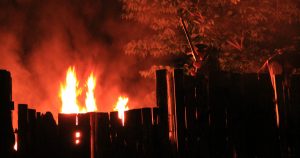 While James Harrod’s legacy continues today, so does the mystery surrounding his disappearance.

Thursday, July 27, is Mercer County day at the Fort Harrod Amphitheater. Theatergoers with valid ID showing they’re from Mercer County will only pay $5 to see “James Harrod: The Battle For Kentucky.” The regular ticket price for adults is $10.

Allan Barlow, managing director of the Ragged Edge Community Theatre, who put on the play, said attendance was up five-percent for this year’s play, but he wanted it to be even better. Barlow also said the special rate is to show his appreciation to the people of Mercer County for their support for the outdoor drama, which is in its sixth year.

Capt. James Harrod is the star of the show, but for a man whose name has been attached to a play, a park, a theater and this city, not much is really known about him. The haze of history has obscured his birth date, which has been given as anywhere between 1742 to 1746, his place of birth, which sits in modern day Pennsylvania but what was then claimed by the Keystone State and Virginia, whether he could read and even his height, which is given as anywhere from five-foot two-inches to well over six-feet tall.

However, the biggest mystery about James Harrod is the time and place of his death. No stone marks the final resting place of Harrodsburg’s founder.

There are three theories about James Harrod’s death. Some believe he deserted his wife. Others believe he was murdered. Still others believe he died by accident, possibly killed by Indians or animals. This is the theory subscribed to by Barlow, who played Harrod for five years and said he’d done extensive research.

“He just walked into the woods and never came back,” Barlow said.