The 18th century comes alive at the Fort Harrod Settlement and Raid, which runs from Friday, June 16, through and Sunday, June 18.

“This is our signature event for the season,” said Park Manager David Coleman.

The event kicks off with a birthday party. Harrodsburg’s 243rd birthday party, which will be celebrated at the park with free cake, a Chautauqua presentation by Daniel Boone and colonial music provided by Don and Esther Drewry.

The main event starts on Saturday. While there are plenty of returning favorites, including the raids on Saturday and Sunday, the Native Village and the Colonial Children’s Camp, where kids learn how the settlers lived, there will be some new events.

“It was very big last year even though it was raining,” Coleman said.

This year, George Rogers Clark will be recruiting for his militia to fight in the Indiana and Illinois territories. But the biggest news is the 18th-century church service at the Big Spring on Factory Street, which reopened to the public in May.

“They’re going to preach the exact same service the two preachers preached on May 4, 1775,” Coleman said.

The service will be led by the Rev. Don Drewry and the Rev. John Frank Jarboe, who will also dedicate the cemetery on Saturday and Sunday.

Settlement and Raid Schedule of Events 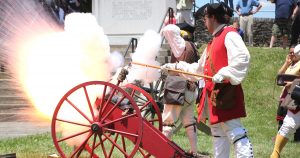 The Settlement and Raid opens 9 a.m. on Saturday, June 17, with a bang. 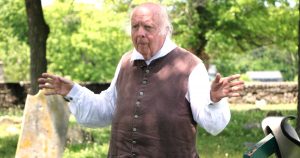 The Rev. Don Drewry, who also provides the authentic colonial music, will be one of two preachers leading services at Big Spring on Sunday.

10 a.m. Militia Muster with Simon Kenton inside the fort walls

11 a.m. Frontier life of the long hunters and settlers with John Curry and Steve Genglebach on main stage

1 p.m. Weapons check (everyone in the fort behind sheep pen) cannons at battery

2 p.m. British and Native Raid on the fort

3 p.m. The Native Experience. After the raid, audience is invited to the Native village for the adoption ceremony of the captives and much more.

7  p.m. Trade blanket (only for re-enactors)

10 a.m. New. An 18th-century church service at the Big Spring on Factory Street.

1 p.m. Frontier life of the long hunters and settlers with John Curry and Steve Genglebach on main stage

3 p.m. The Native Experience at the Native village