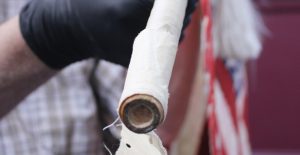 The staff of Jose Quintero’s flag was made of the same bamboo prod Japanese guards used to beat prisoners with.

The flag is delicate, sure. It was made of cheap materials during World War II. But it’s more than that.

“I can’t put it into words,” Waterfill said when he was asked what the flag meant to him. “I can’t explain it.”

Waterfill, a Vietnam veteran, received the flag from his former commanding officer, and it just seemed natural to bring it to the Harrodsburg Tankers Memorial on College Street.

Quintero, who was also known as Joe and as Don Jose, served with the 60th Coastal Artillery Regiments in Corregidor in the Philippines. Like many of the Tankers, he started out in the National Guard before being pressed into active duty in the months before America’s entry into WWII.

“He saw a lot of people die all around him,” said Lt. Gen. Edward Baca (Ret.), who was Waterfill’s commanding officer in Vietnam and is now the caretaker of Jose Quintero’s flag. “Those that survived it, survived on pure will.”

Like most of the Tankers, Quintero, who was born in Texas and lived in New Mexico, didn’t know much about the world. He’d only joined the military for the $21 a day in wages. The first time he saw the Pacific Ocean, he thought it was the biggest lake he’d ever seen.

But like the Tankers, Quintero, whose parents were first-generation immigrants from Mexico, loved his county.

While he was a P.O.W., he began scrounging materials for a special project, learning more about the United States as he assembled each part of his flag. What the 13 stripes meant. What the stars represented. What the red, white and blue stood for.

At Niigata P.O.W. camp, it meant death if he was caught pilfering a red blanket and white bed sheets from the Japanese guards. It would have been death if he had been caught with his friend, a Canadian soldier who was a double amputee and worked in the tailor shop, putting together his American flag, sewing all 48 stars one by one onto a blue background made from pilfered Filipino dungarees. It took them a year, and if they’d been caught, it would have been instant death. Every night, Quintero wrapped the flag in canvas and buried it under his bunk.

He wasn’t just risking his own life, Baca said. The prisoners were placed in groups of 10. If the guards had found Quintero’s flag, it would have meant death for member of in his group as well.

It meant death until the day it meant life.

One day Quintero heard bombers overhead. The Japanese guards scrambled for cover. The bombers were American. Like most prisoners, he had no idea how the war had been going and he was surprised to see them flying over the Japanese mainland. But he knew if he didn’t do something, he and the other prisoners could die in the friendly fire. He removed his flag from its hiding place and waved it at the incoming aircraft. The lead plane tipped its wings and flew past the camp.

“He saved the lives of all his brothers and the guards,” Baca said.

When American troops liberated the Niigata POW camp after the Japanese emperor surrendered, Cpl. Joseph O. Quintero greeted them with his handmade flag.

After the war, Quintero, who’d tended the sick in the prison camp, became a physician’s attendant. He didn’t talk about the war. On patriotic holidays, he’d put on his uniform and take out his flag, but he never told his family his story. Even though he’d been awarded the Silver Star, the Presidential Unit commendation, a Purple Heart, three campaign ribbons and the New Mexico Medal of Honor. Quintero. didn’t received them until Gen. Baca, the chief of the National Guard Bureau, organized a reception for him. That’s when Quintero and Baca became friends.

In 1991, when Baca presented Quintero with his medals, Quintero told him, “I’ve got a surprise for you.”

Since then, Baca has told the story of Qunitero—who died in 2000 at the age of 82—in almost every state in the nation and he has taken the flag with him. It’s old and delicate, but that’s not why Baca wears gloves when he handles it.

“The Harrodsburg Tankers suffered the same fate,” the general said.

Ultimately, Baca wants the flag to be on permanent display at the Smithsonian Institute, along with Quintero’s uniform and citations.