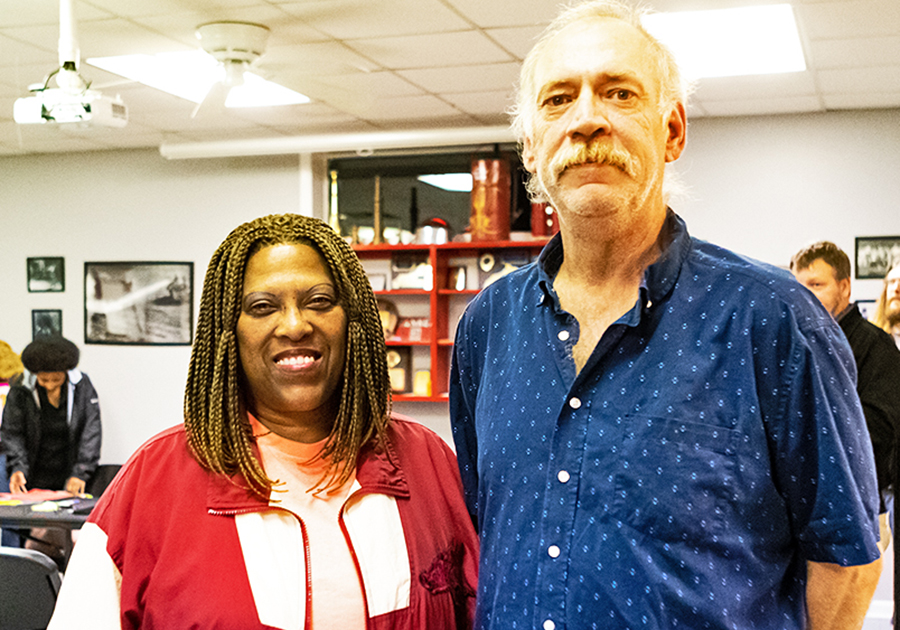 The Harrodsburg Herald/Robert Moore
Margie Brothers poses with Burgin Mayor Joe Monroe. Monroe said Brothers played a key role in the city getting fuderal funding for a flood relief project. “She’s the one who got all of this started,” Monroe said.

The City of Burgin has learned they will receive a $562,000 earmark grant from the federal government to alleviate flooding along Water Street in the city.

Burgin Mayor Joe Monroe made the announcement at Burgin City Council’s first meeting of 2023, which was held Tuesday, Jan. 10, at the Burgin Fire Department. Burgin was hoping to receive a $750,000 grant, which would go to installing two 30 inch pipes at least 150 feet under the city as well as pumps to control flood waters. It has been estimated the project will cost more than a million dollars.

Monroe said he’d met earlier that day with state officials and Rep. Brett Guthrie, who formerly represented Mercer County before redistricting, and Rep. Andy Barr, whose congressional district now includes Mercer County. Despite Guthrie’s professed aversion to using earmarks, he pressed to have the funding included in the latest federal budget. Monroe expressed confidence the state could make up the difference in funding.

“The state says there is money there for us,” Monroe said. The city will have to fill out an application.

While thanking Guthrie, Barr, Senators Rand Paul and Mitch McConnell and Lt. Gov. Jacqueline Coleman for their efforts in securing the funding, Monroe singled out Burgin resident Margie Brothers for her role in finding relief for flooding in Burgin.

“She’s the one who got all of this started,” Monroe said. “If it hadn’t been for her pushing, it wouldn’t have went no where.”

“I really, really want to thank Margie for the work she got done,” said Monroe, who also thanked former mayor Jim Caldwell and the office staff for all their hard work.

“I didn’t know the time that was involved in this,” said Monroe, who was elected in November 2022 and assumed office at the beginning of the year. “They’ve done more work than they should have to get it done.”

“Glad to hear the news,” said Margie Brothers. “I’m excited about it. Now I just want to see some action.”

Monroe asked the citizens for their continued patience. He said it could take a full calendar year to receive the federal funding.

“I will feel more comfortable when we have it here,” said Monroe, who said the city can’t spend the first dime until they get the money in hand.

“The only thing we can do with it is sit here and talk about it,” Monroe said. He said the congressmen had called warning him away from spending it.

James Dunn, a resident of Burgin who also chairs the board of directors for the Mercer County Sanitation District, asked about funding for a complete storm water drainage system. Noting all the new construction in the friendly little city—Dunn said there at least 32 new houses being built behind where he lives—he said Burgin needs to be proactive about installing a storm water drainage system. Burgin has long relied on an underground cavern for drainage, but Dunn recommended seeking grants to deal with storm water.

“We only put in the sewer lines,” James Dunn said. “Totally different.”