A Harrodsburg man has been arrested in relation to the September theft of two vehicles and tools.

On Thursday, Sept. 29, Dep. Bill Cruce of the Mercer County Sheriff’s Office executed two search warrants, recovering a 2002 Ford Ranger and a 1986 John Deere tractor which had been reported stolen on Sept. 4. Cruce said they located the truck and tractor several hundred yards in the woods off Central Pike. 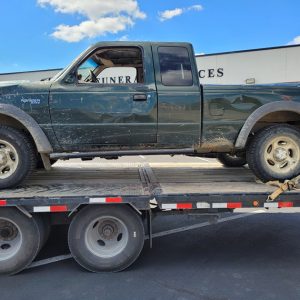 Rewards of up to $10,000 have been offered for information leading to the arrest and conviction of the alleged thief, with the owner offering a $4,000, the Kentucky Farm Bureau offering $5,000 and Mercer County Crime Stoppers offering $1,000.

Cruce said an informant provided the information that led to the search warrants. He said the informant sand the tractor was going to be sold for parts.

The deputy said the truck and tractor have been returned to the owner but the bucket and tools are still missing. The investigation is still ongoing and more arrests are possible, Cruce said. The value of everything stolen amounted to approximately $26,500.

Over half of all insurance claims involving heavy equipment are thefts, according to a 2002 report complied by the U.S. Department of Justice. Even with the launch of the National Equipment Register in 2001, the recovery rate for heavy equipment is 20 percent due to the difficulty of identifying heavy equipment and scant oversight in the used equipment market.

Sampson was arraigned in Mercer District Court on Monday, Oct. 3, where his case was sent to the grand jury. Sampson was released on a $5,000 bond on the condition he have no contact with the victims or their property.

If you have any information, contact Dep. Bill Cruce of the Mercer County Sheriff’s Office at 859-265-0751.