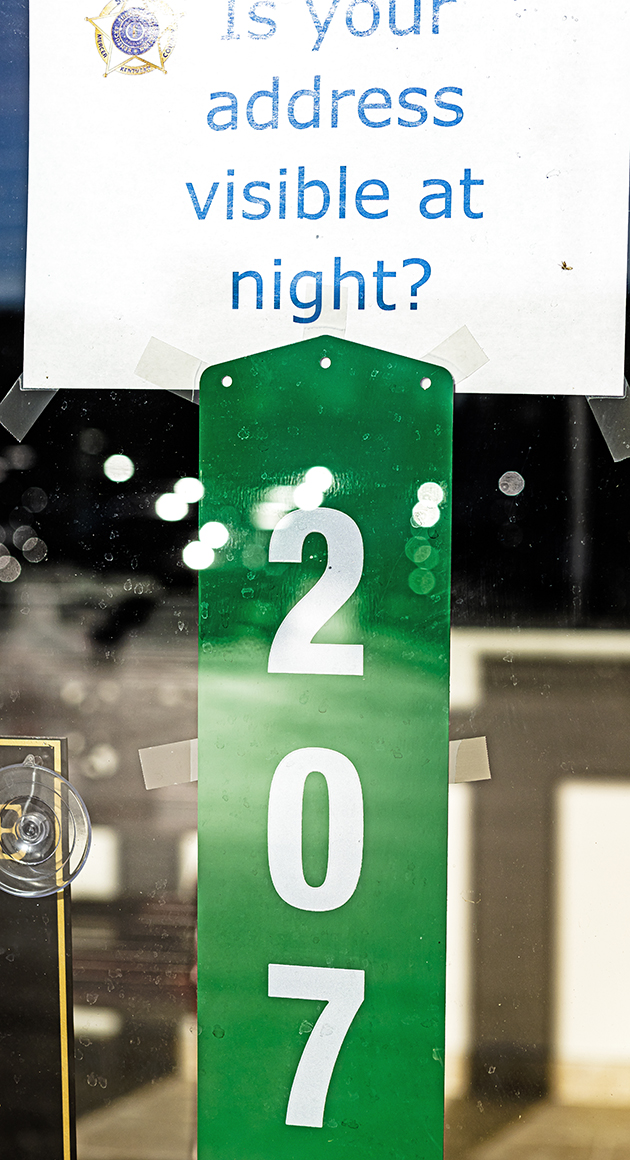 The Harrodsburg Herald/Robert Moore
The Cornishville Fire Department is offering markers that can help first responders quickly find your address during emergencies.

Mercer County’s first responders are asking homeowners to give them a chance at finding you.

It’s been estimated that nearly half of the more than 11,000 residences in Mercer County don’t have house numbers that are visible from the street at night. There are many different issues that can hold up the delivery of emergency services. Some houses are too far back from the road, some have the wrong numbers, sometimes mailboxes are not sitting next to driveway.

“When you have a major emergency, seconds count, Earl Motzer told the Mercer County Fiscal Court last week. The magistrates approved paying up to $3,200 to send a mailer to everyone in the county—approximately 29 cents per resident—informing them about proper display of 911 addresses and about the CivicReady mass notification system.

“We can’t count on everybody to look at the Mercer County website, not everyone has a subscription to the Harrodsburg Herald, not everyone listens to WHBN,” Motzer said.

The Cornishville Volunteer Fire Department is selling reflective address markers for $20. The markers can be seen day or night and are fade resistant. You can order them by calling the fire department at 859-613-4096.

Motzer also asked the fiscal court to bring the ordinance requiring the display of 911 addresses up to date. He said the county need to inform building inspectors, landlords and real estate agents.

“Some people don’t recognize how important that is,” Sheriff Ernie Kelty said. Kelty said he couldn’t say how many times—especially at night—first responders have had to search for addresses. “We would like to see something out there that’s big enough and reflective that we can find the address.”

Kelty asked people to take a look at their residence and make sure their address was visible from the roadway.

“It can be a life or death thing,” the sheriff said.

“You’re wasting a lot of time knocking on doors at 3 o’clock in the morning,” Maxfield said.

Then there is CivicReady, the service used by Bluegrass 911 to sent out emergency alerts and severe weather warnings. Formerly, mass alerts were sent to county residents who signed up to Code Red. But Motzer said not many have switched over to CivicReady since Bluegrass 911 took over telecommunications for Mercer County over in July 2021.

“The bad news is, very few people have signed up for it,” Motzer told the court. He suggested using the mailer for both issues.

The mailer should be out before the end of the year. You can sign up with CivicReady by visiting the county’s website, mercercounty.ky.gov.

Bluegrass 911 Central Communications is able to send emergency alerts via text message, email, pager, or voice mail based on your preferences. The alerts are provided free of charge, however standard text messaging rates and other charges may apply. If you wish to subscribe to SMS text messages only, text your zip code to 38276.  There is also a mobile app available on Google Play and the Apple Store. For more information, visit the Bluegrass 911 website.

The Mercer County Fire Protection District is also informing the public that Fall fire season began Oct. 1 and runs through Dec. 15. In Mercer County, burning within 150 feet of a woodland or bushland are only allowed between the hours of 6 p.m. through 6 a.m.

All other open burning regulations still apply. Register your open burn with Bluegrass 911 by calling 859-792-3023.