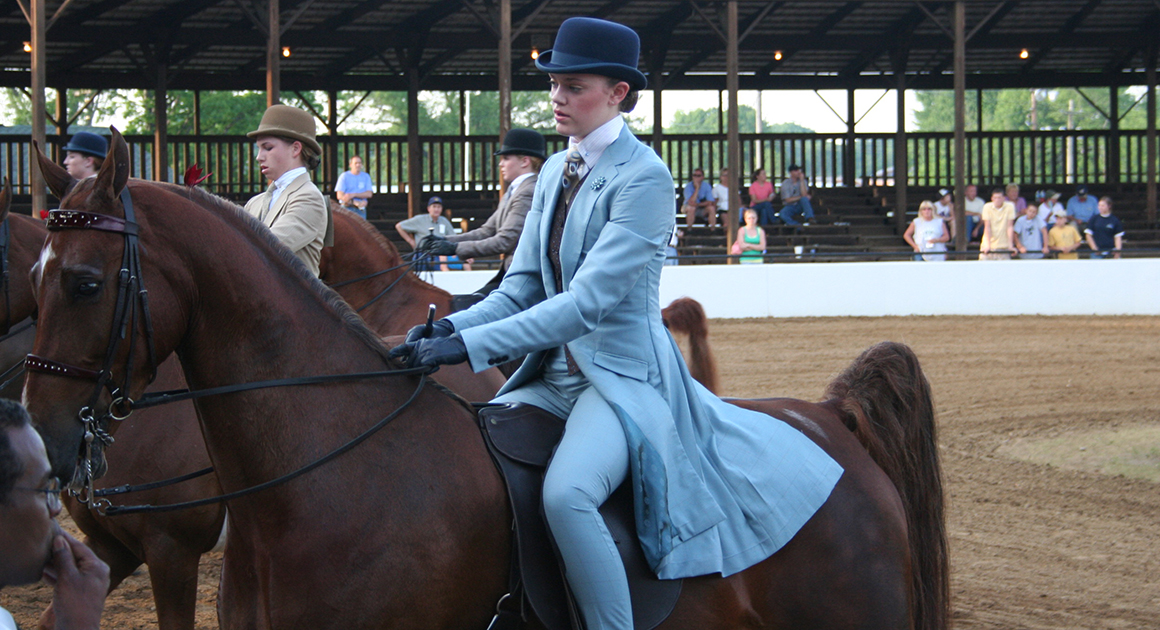 Saddle seat competition in 2006. Image by John Goetzinger from Atlanta via Wikipedia.

So what is saddle seat? It developed in the American South. It’s supposed to look effortless, which takes an incredible amount of effort. Teams from as many as five nations compete for the World Cup Every other year, either in the United States or South Africa.

“Because of COVID, we missed the one in South Africa and they asked us to do it here this year,” said Barbe Smith, president of US Saddle Seat Association and a representative with the International Saddle Seat Association. Smith called Brad Noel, manager of the Mercer County Horse Show this winter and said, “Let’s try Harrodsburg.” 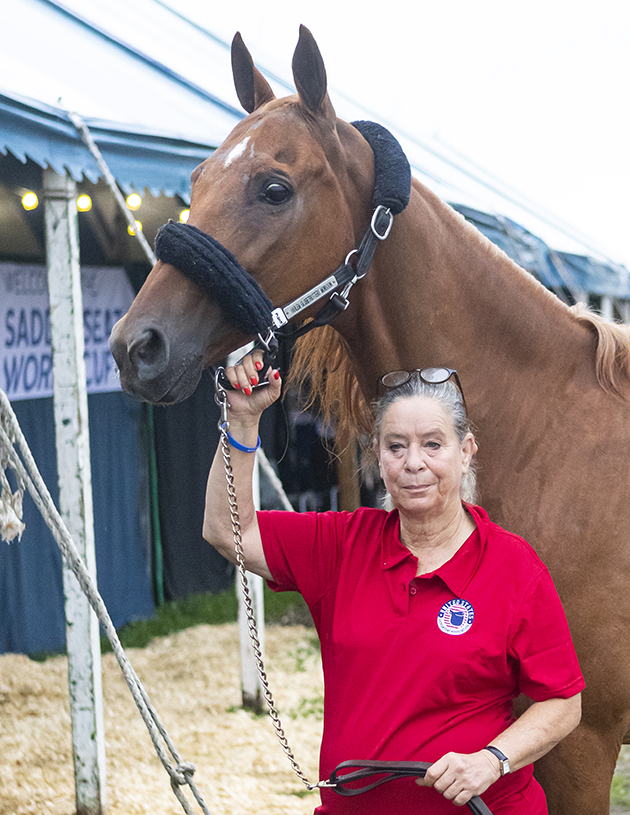 The Harrodsburg Herald/Robert Moore
Barbe Smith, president of US Saddle Seat Association, invites everyone to the the International Saddle Seat Equitation World Cup starts on Wednesday, July 27, with opening ceremonies scheduled to start at 6:15 p.m.

“Harrodsburg is known for the oldest continuous horse show in the nation,” Smith said. “So why shouldn’t this host the biggest saddle seat event?”

Originally from Detroit, Smith began riding at Audubon Stables in New Orleans, Louisiana, in 1963. She has owned and has operated Cascade Stables in New Orleans since 1981 and has coached riders to the World’s and National Championships and has had riders selected to the U.S. Saddle Seat World Cup Team. According to the Cascade Stables website, Smith serves on the United Professional Horseman’s Association’s board of directors and the equitation committee. She has served as vice president of the Louisiana American Saddlebred Horse Association and is a licensed judge. In 2010, Smith was inducted into the Helen Crabtree Instructor Hall of Fame.

“As a little girl, I started riding and this is what happened,” Smith said. “It happens to a lot of little girls, I’m afraid.”

She has been riding in Mercer County for decades.
“We come every year to Harrodsburg to show because we love it,” Smith said. “Last year we had a volleyball tournament behind our barn and a barbecue.”

The Saddle Seat World Cup started in the early 1980s as an informal exchange between the US and South Africa. According to the US Equestrian Foundation’s website, the World Cup began as a three-gaited saddle seat equitation showcase, that has expanded to include a five-gaited component.

“This is comparable to the Olympics for saddle seat,” Smith said.

The event features amateur athletes 14 years of age and older who compete for individual scores, which ultimately accumulate toward a total team score. The athletes compete on donated horses. Smith said 52 horses have been donated for this year’s World’s Cup. Every team picks a pool of horses.

“They can’t have ever ridden that horse before,” Smith said. “That horse is totally new to them.”

The competition consists of four segments completed in two different days: rail work, where the athletes compete as a group, and individual workouts.

“I think this is the only thing we do in saddle seat that’s a team sport,” Smith said. “This is based totally on the team. The camaraderie that develops out of this is phenomenal.”

“We’ve tried to use all the local people in Harrodsburg. Shaker Village has been fantastic,” Smith said.

Riders get three separate numeric scores from the judges, she said. Smith said at the closing ceremony on Friday, the winners will get to stand on podiums and receive medals like in the Olympics, but having the event as part of the Mercer County Fair is special.

“It’s the first time we’ve hosted it with a county fair atmosphere. That’s so cool,” Smith said. “They’re going to go out and eat cotton candy. ”

On Wednesday, during the opening ceremonies, the teams will display their team colors as well as their country’s flags, Smith said. The competition starts at 10 a.m. on Thursday, July 28, and Friday, July 29, with the closing and medal ceremonies scheduled to start at 8 p.m. on Friday.

Smith thanked Noel and LeMayne Ellis, president of the fair board, and the staff at the Mercer County Horse Show for all their hard work.

“It’s been unbelievable,” Smith said. “The town is great and the people are great.”