The 127 Yard Sale is back, and state and local officials are asking everyone to stay safe. The event runs from sun up to sundown from Thursday, Aug. 4, through Sunday, Aug. 7.

The yard sale is billed as being the longest in the world. It spans 690 miles, beginning just north of Addison, Michigan, and ending in Gadsen, Alabama. 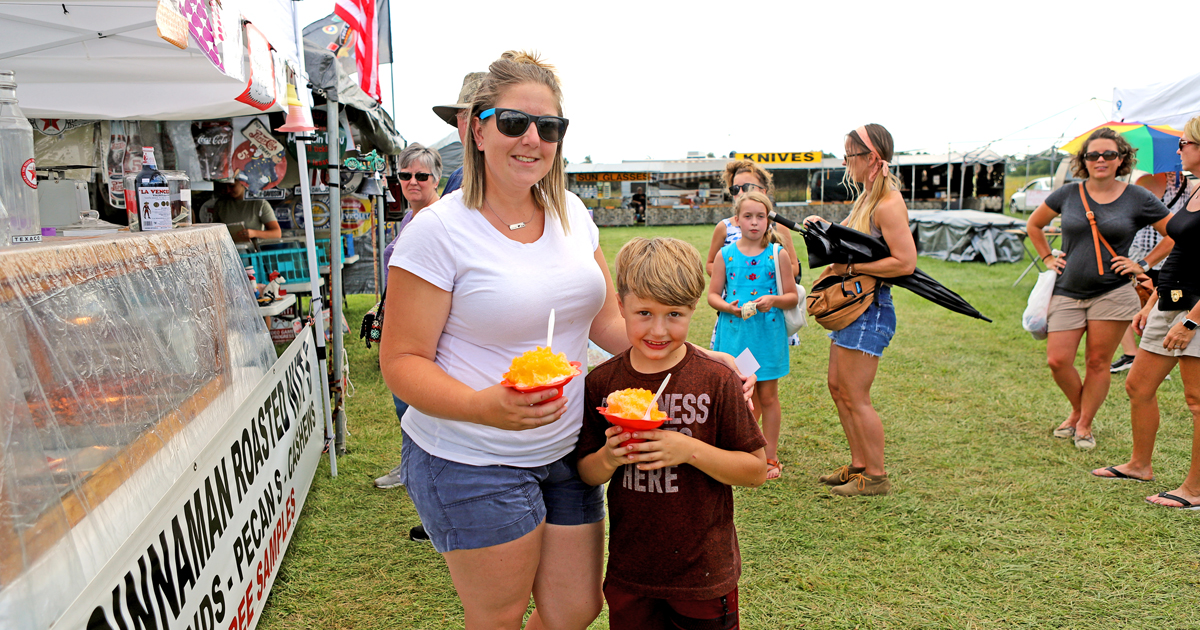 Janie and Brodee McClellan cool off with some orange icies. They were among the bargain hunters who poured into Mercer County for the 127 Yard Sale in 2019. (File image).

While there will be sales practically everywhere in Mercer County, the biggest will be at the Smock Farm (3580 Louisville Road) where more than 100 vendors have their wares on display. The Smock family have been participating in the 127 Yard Sale for more than two decades, and their event has grown to be the second largest in Kentucky.

The Knights Of Columbus are holding a sale at Old Fort Harrod State Park (100 South College Street) from Thursday, Aug. 4, through Saturday, Aug. 6.

This year marks the 35th anniversary of the 127 Yard Sale, which began in 1987. According to the website, Mike Walker, former Fentress County Executive in Jamestown, Tennessee, planned the event to encourage travelers to bypass interstate highways in favor of scenic routes that would take them through rural communities and allow them to experience what the small towns and cities had to offer.

Mercer Sheriff Ernie Kelty and his deputies already started preparing for the sale, placing signs all along U.S. 127 warning people not to park on the median lane during the yard sale. No sales or parking is allowed on state right of way. In addition to being a safety hazard, it is illegal under state law.

Sheriff Kelty said they will step up patrols during the sale too. He said deputies will strictly enforce the no parking law and the legal speed limit.

According to the Kentucky Transportation Cabinet, the laws ensure drivers have the proper amount of sight distance for intersections, driveway entrances and curves. Any encroachment on state right of way requires a permit from the cabinet.

Some other safety tips for bargain hunters:

• Watch for parked cars, slowed traffic and vehicles turning into or out of side streets and driveways.

• Park a safe distance from the highway, preferably outside a 22-foot “recovery zone” extending from the white line on the pavement edge. This area gives motorists room in which to maneuver in case of trouble.

• Watch for pedestrians, and especially for children and pets in the area of yard sales.

• Use seat belts, obey posted speed limits and other traffic laws, and refrain from drinking and driving.

The 127 Yard Sale runs all day each day, Thursday, Aug. 4, through Sunday, Aug. 7, 8 a.m. to 6 p.m. While there will be sales practically everywhere—and not necessarily on U.S. 127—four of the biggest events in Kentucky are located nearby.