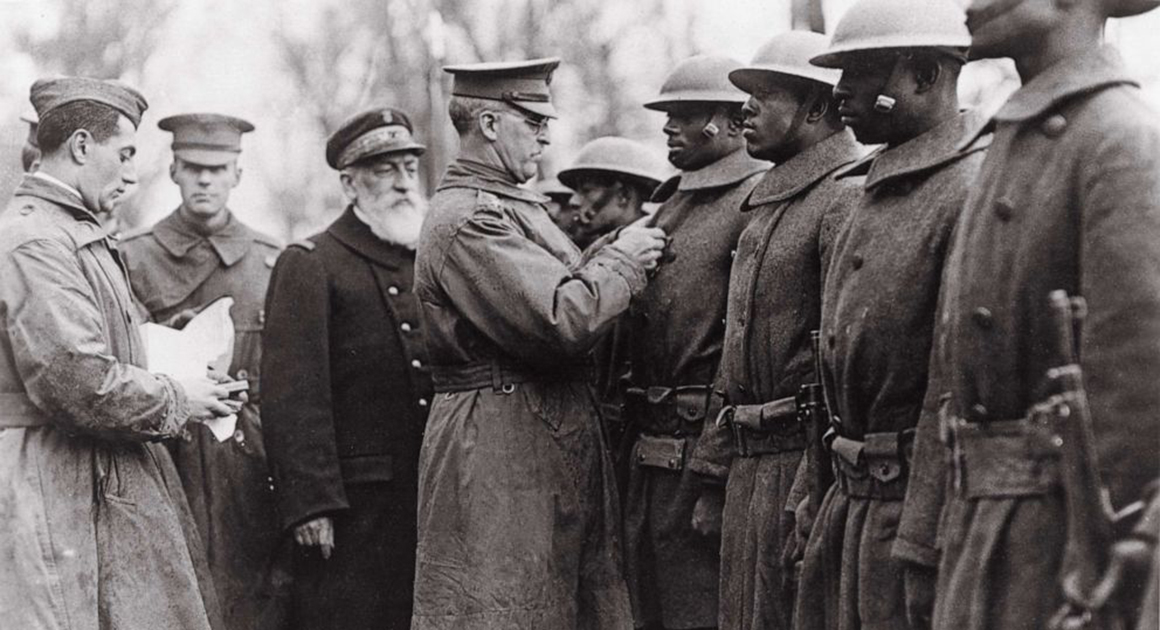 Soldiers of the 369th Regiment, known as the Harlem Hellfighters, receive medals awarded to them by France for their valor in battle alongside the French Army in World War I. (Image: Signal Corps/Washington University Libraries.)

Help honor one of Mercer County’s forgotten heroes on Memorial Day weekend. A marker dedication ceremony is being held Sunday May 29, to honor Cpl. Charles W. Estell, who died in World War I.

The James Harrod Trust is inviting the public to the memorial ceremony, which is scheduled to start at 3 p.m. at Centennial Baptist Church (291 West Lane).

Local military historian Rick Lee will be the featured speaker. Music will be directed by Bro. Bobby Dale Harris. The Kentucky National Guard and Sgt. Albert Lee Taylor will conduct the flag ceremony and there will be a static display of military equipment at West Lane Park.

Following the program, the James Harrod Trust will host a reception at the Centennial Baptist Fellowship Hall, assisted by members of the Jane McAfee Chapter of the Daughters of the American Revolution. World War I reenactors are encouraged to participate.

On Oct. 26, 1918, Estell was a member of Company C of the 801st Pioneer Infantry Regiment. who were clearing trenches after the Battle of Chateau Thierry in France—one of the first actions of the American Expeditionary Forces under Gen. John J. Pershing. Estell was killed when a live shell exploded, fatally wounding him in the chest.

During a cemetery census at Maple Grove Cemetery sponsored by James Harrod Trust, it was determined Estell was buried in an unmarked grave. Research to identify his descendants and order a marker began immediately, according to Kandie Adkinson of the James Harrod Trust.

“Many of our fellow Mercer Countians left home to fight in battles in places far beyond our shores,” Adkinson said via Facebook. “Some returned home; some did not. Wherever their final resting place may be, we honor their service, their valor and their sacrifice.”

The Trust gratefully acknowledges the Veterans of Foreign Wars Bataan Memorial Post, the City of Harrodsburg, Cemetery Sexton Rosalyn Drury and Larry and Lee Sanders of Alexander & Royalty Funeral Home for their contributions to placing a permanent marker for Estell in Maple Grove Cemetery.

Sunday’s featured speaker is local military historian Rick Lee. Originally from Chicago, Illinois, Lee’s father was a veteran of World War II and the Korean War era. Lee is a veteran himself, having served with the 101st Airborne Division and the Third Armored Division during the Persian Gulf War.

Having collected soldiers’ stories since childhood, Lee is a member of the Central Kentucky World War II Roundtable and has worked with the Library of Congress’s Veteran’s Oral History Project. Among the veterans Lee has interviewed include Frank Buckles, who, at the age of 108, was one of the last living veterans of World War I.

A resident of Harrodsburg, Lee published his book, “Tribute to Valor and Courage: Narratives of American Service Men and Women During World War II” in 2013.

Even though Black soldiers have fought in nearly every armed conflict in American history, the idea of sending them into battle was still controversial at the beginning of the Great War. Many Black soldiers like Estell were assigned to the Pioneer Infantry Regiments, where they served as combat engineers. Their units were the first to arrive in France.

Gen. Pershing admired Black soldiers for their valor, having earned the nickname “Black Jack” while commanding units of Buffalo soldiers in the Spanish America War in 1899 and the Mexican Punitive Expedition in 1915. In 1918, Pershing assigned the 369th United States Infantry, a regiment of Black combat troops, to help the French Army. Nicknamed the “Harlem Hell Fighters,” the 396th were the first to reach the Rhine River and provided the longest service of any regiment in a foreign army.