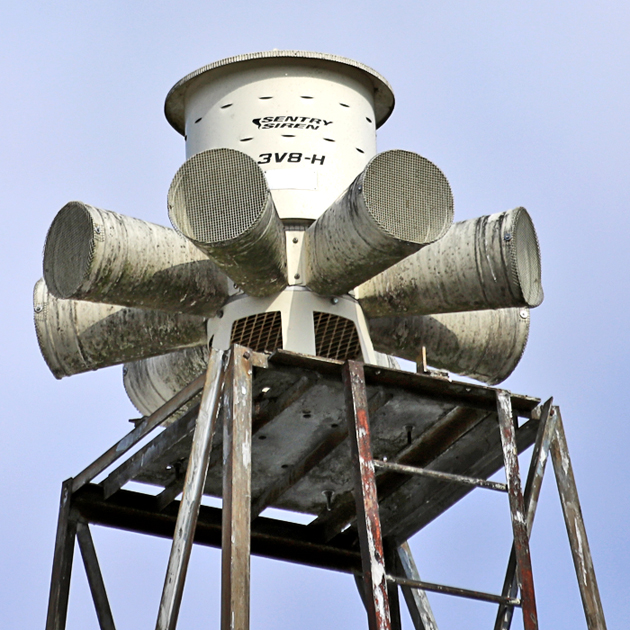 Weather siren that sits on top of the Harrodsburg Post Office. (File image).

Mercer County officials are installing equipment to allow them to operate the weather sirens locally after receiving complaints the sirens did not signal in a timely fashion Thursday night, when a series of severe storms rolled through the area.

Bluegrass 911, which took over 911 dispatch operations for Mercer County earlier this year, were supposed to trigger the warning system from their headquarters in Lancaster.

“I told them I hadn’t heard anything,” Bugg said. “From over there, they thought they went off.”

Bugg said they are installing equipment to allow local officials to better control the system in the future.

Many were upset it took so long for the sirens to be sounded. Mercer County Judge-Executive Scott Moseley said he was notified by several people and contacted the director of Bluegrass 911 at 9:05 p.m.

Bluegrass 911 personnel have been using the warning system since taking over 911 services, including testing the sirens each Saturday. However, they were using the equipment at Harrodsburg Dispatch. Moseley said the equipment in Lancaster had been programmed  incorrectly while switching over.

“They are rectifying it immediately,” said Moseley, who called the issue “100 percent inexcusable.”

Both the Mercer County Fiscal Court and the Harrodsburg City Commission voted to close Harrodsburg Dispatch and merge 911 operations with Bluegrass 911 in July of last year, citing ongoing staffing issues and the costs of running the department, which include hardware and software. County officials noted this was the first major weather event since the closing of Harrodsburg Dispatch.

While talking with the Harrodsburg Herald Thursday morning, Bugg received a text from Bluegrass 911 letting him know they had repaired the issue.

Even before closing Harrodsburg Dispatch, Bugg said the county received complaints about the sirens.

“Most people complain because they can’t hear it,” Bugg said. Bugg said the sirens are designed to be heard outside. Depending on where they live, people may not be able to hear the sirens while inside their home.