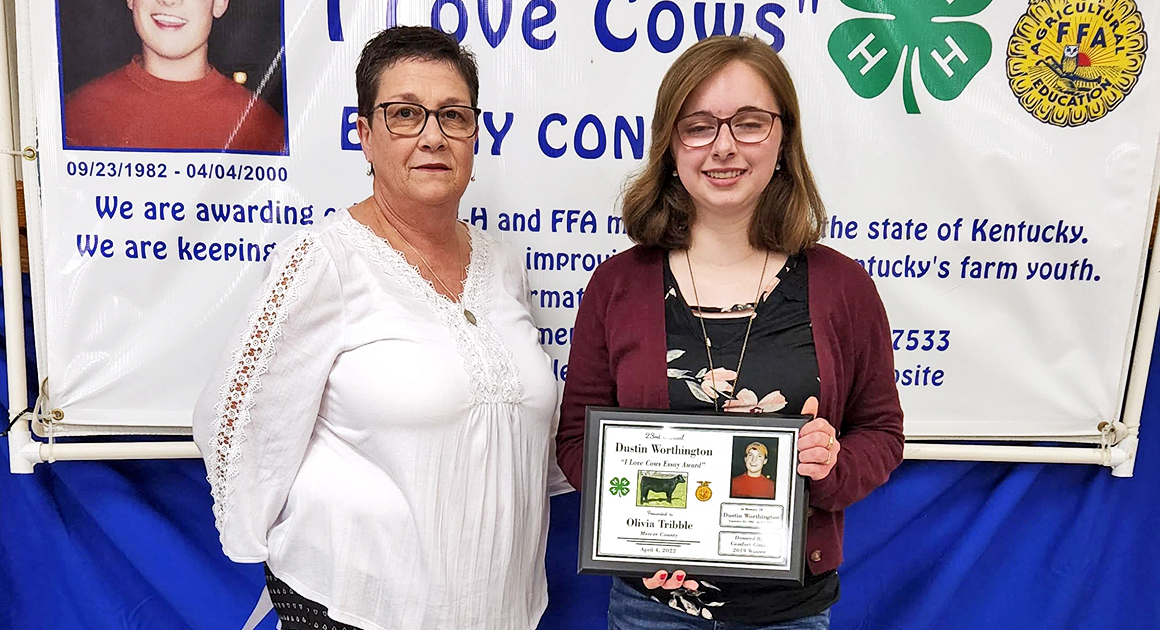 Over 60 people from across the state gathered on Monday. April 4, at the Mercer County Extension Office for the 23rd Annual Dustin Worthington “I Love Cows” Essay Contest awards ceremony. This year’s ceremony saw 14 heifers given away to students who participated in the contest.

The contest is open to all FFA and 4-H members interested in the cattle industry in Kentucky. This year, 56 entries from 29 counties were judged by a local committee. This year also included at-large statewide awards in each 4-H organization and FFA organization.

Any youth in Kentucky could apply except for counties that have a county contest. In addition to Mercer, the county contests were open to the youth in Casey, Henderson, McLean, Metcalfe, Russell, Warren and Washington counties.

Here are the other county winners:

The award was established in 2000 after the death of Dustin Worthington, a Mercer County teen who was involved in the cattle industry. Worthington was killed along with his friend Dale Goodpaster in an automobile accident on April 4, 2000, near the community of Mayo in Mercer County.

In 2000, two registered beef heifers were donated and given away. To date, 323 animals have been awarded to 4-H/FFA youth across the state.

This program encourages, but does not require, youth to participate in a “chain program,” this is when the first-born heifer is donated back to the program. Some of the past winners have volunteered to donate their first heifer calf to the fund for future winners. We have had 131 past winners donate animals back to the program to date.

This year, one heifer was purchased by the Dustin Worthington Memorial Fund. Farms or individuals interested in donating a heifer of any beef breed can contact Dena Worthington at 859-612-7260.

FFA and 4-H students or leaders interested in participating can get information by visiting the Dustin Worthington Memorial website at www.dustinworthingtonmemorial.org.

Financial contributions can be mailed to 436 Arrowhead Road, Harrodsburg, KY 40330.